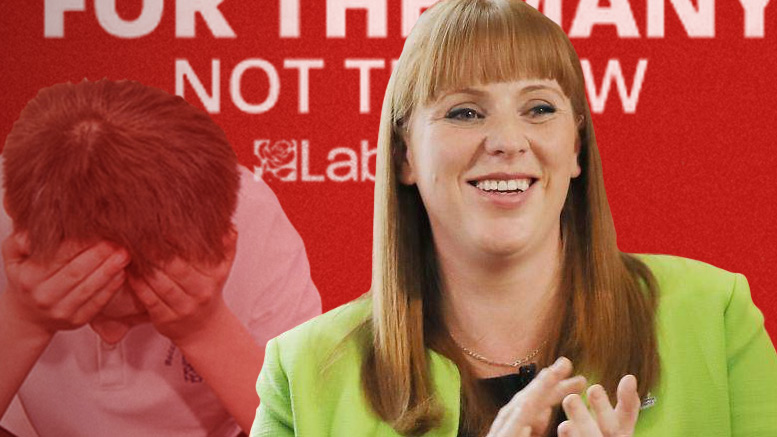 The latest Department for Education statistics have revealed that white working-class boys are being let down by successive governments which put their population replacement agenda before the interests of indigenous British children.

One in eight English schools are now failing, with white working-class especially affected and disadvantaged by school programmes prioritising ‘ethnic minorities’ and ‘gender studies’ above all else.

For the first time, children whose first language is not English, are now outperforming native speakers on every recorded education measure.

The gap widened with respect to the EBacc, the government’s school performance measure of a foreign language, English, maths, the sciences and history or geography.

Earlier this month, Shadow Education Secretary Angela Rayner [pictured] admitted that education programmes designed to eradicate ‘discrimination against women and members of ethnic minorities’ has had a “negative impact” on white-working class boys while blaming their “culture”:

“I think it’s because as we’ve tried to deal with some of the issues around race and women’s agendas, around tackling some of the discrimination that’s there, it has actually had a negative impact on […] white working boys.

“They have not been able to adapt.

“They are under the impression that they don’t need to push themselves in the way that maybe the disadvantaged groups had to before.

“I think that is why there is a bit of a lag there.

“I think we need to do much more about the culture of white working-class in this country.”

By contrast, white middle-class children avoided stultifying multiculturalism programmes by way of their families spending “a huge amount of money” to move out of ‘culturally enriched’ places to areas with a good school or getting a private or grammar school education.

For many hard-pressed working-class families, this isn’t an option, Ms Rayner added.

The level of immigration into Britain has also resulted in unprecedented overcrowding in classrooms.

Successive governments’ Mass Immigration agenda ensures that the problem continues to get worse.

Following a Freedom of Information request which revealed that one secondary school classroom had 182 pupils and three other cases where classrooms had more than 100 pupils, Rayner, shifted the focus from the problem of Mass Immigration which is pushing every public institution to breaking point and blamed instead the government for failing to throw more taxpayers’ money at the problem.

According to research carried out by the University of London :

“They are being turned off school by lessons that celebrate diversity but do not ‘reflect the culture and lives’ of their own community.”

Parents lamented a ‘lack of white culture reflected in school life which perpetuated the marginalisation they felt within their communities’.

White males are now the most persecuted ethnic minority, being singled-out for blame, and targeted for persecution by the anti-white and anti-male far Left.

Britain has reached a point where immigrants are no longer expected – even asked – to assimilate with British society,

Instead, the native British population is being forced, to their huge detriment, to change their society to accommodate immigrants while paying for the government to administer its destructive agenda.

In a society which the morally reprehensible political Left views being ‘white’ and ‘male’ as profoundly bad and necessary of suppression, is it any wonder our young white boys are failing to find anything positive to which to aspire?

The British political class has spectacularly failed the British people.