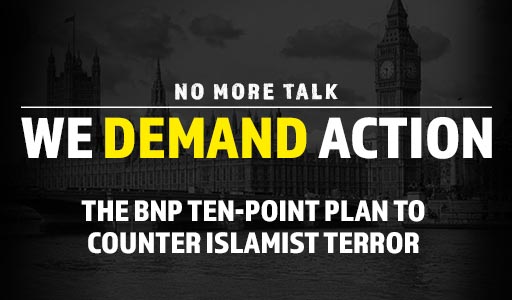 1/ Deport Islamic fundamentalists and their families

Scotland Yard has already announced that there are at least 3,500 jihadis in Britain with estimates weighing in at more than 23,000 operating in cells and actively plotting murderous terror attacks.

This means that by the standards of the Government of the United States, the British Government is a rogue state harbouring terrorists.

The parents of the Manchester bomber were given refugee status and refuge in Britain from Libya; this is how they repaid our kindness.

They have proved their incapacity and inability to integrate with British society.

Britain owes these people nothing!

We are at war!

The Islamists have declared war on Britain; the British Government deliberately refuses to listen and accept the reality.

Given the surging level of crime committed by those in the Muslim community, our prisons are being taken over and other prisoners forced to convert or face violent repercussions.

Action needs to be taken, and this needs to stop!

Island detainment or offshore detainment centre ships – remove the threat to all British citizens from our communities in the interest of all our safety.

The Manchester bomber used state benefits to fund the slaughter of our children.

Soft-touch Britain is not only costing the British people an arm and leg in taxes; it’s literally blowing our children apart.

In spite of international law clearly stating that an asylum seeker must seek refuge in the next safest country, hordes of bogus asylum seekers from the most backward nations and cultures travel across countless countries and even entire continents to claim benefits from the welfare state in Britain, paid for by us hard working Brits.

The continual interference and meddling in Muslim nations has incited Islamist jihadis to indiscriminately target Westerners for death, despite the fact that we ordinary citizens NEVER backed these foreign invasions and many actively and vocally spoke out against them.

These wars, in the interest of Israeli geographical supremacy in the Middle East and US foreign domination, do not warrant a single drop of British blood.

The continual harassment, meddling, and funding of Islamist terror groups against the legitimate Syrian Government MUST stop!

Syria – until recently, home to the most ancient Christian community and a haven for different Muslim communities and Jews – was the only secular Muslim nation in the Middle East and a barrier holding back the tide of Middle Eastern and Third World hordes seeking benefits in Europe.

Put former Prime Minister Tony Blair on trial for war crimes and demonstrate to the world that we mean business and justice will be served!

Radicalised mosques are known to the authorities who fail to act because they are tied up with red tape and scared of being called ‘racist’ by their fellow Politically Correct peers, institutions and the MSM (mainstream media).

The confiscation of mosques from irresponsible and dangerous Islamist communal leaders and their subsequent closure is an essential and necessary move to stem the proliferation of radicalisation.

The poisonous ideology of Political Correctness has resulted in the mass rape and torture of children in Rotherham and countless other towns and cities and the slaughter of our children in Manchester.

Set up an independent anti-Political Correctness unit to identify and remove Politically Correct police chiefs and heads of authority.

After the Rotherham horrors were exposed and the extent of the collusion by the police, politicians, and authorities to cover it up, the Labour Party Political Police Chief Shaun Wright refused to not only accept any blame but also refused to resign for weeks.

He did so after a media campaign aided by BNP pressure and activism.

The aforementioned independent special intelligence unit will also be responsible for identifying radical Islamist clerics for detainment and expulsion from Britain under the classification of ‘persona non grata’.

They will be detained for the duration of negotiations and until a deal can be made with their country of origin or a Muslim nation which will take them.

Once a deal is made, they will be deported.

Any appeal on the grounds of ‘human rights’ is to be repealed and no exemption will be given to whether they happened to have been born on British soil or not.

The burqa and niqab, like the minarets on mosques, is a symbol of Islamic conquest and colonisation.

The wearing of the burqa is a blatant affront to the culture in which these people chose to live and a defiant refusal to behave according to the most basic norms of civilised society.

The act of concealing one’s identity is tantamount to community terror; it is intimidating, threatening and a danger to the safety and wellbeing of the public at large.

With the exception of safety equipment (such as dust masks and visors) and helmets – permitted to be worn only during those activities and the operation of heavy equipment – concealment of the face is illegal and the law must be upheld.

No exemption to this rule will be made on religious grounds.

9/ A temporary ban on all Immigration

The engineered Mass Immigration agenda into Europe and subsequently Britain has been consciously and disingenuously framed as a ‘refugee crisis’; the political class and the MSM are directly responsible for the astonishing rise in crime and terrorism.

Waging war on, and bombing, a foreign sovereign nation, while at the same time inviting millions of people from that country to come and live in Britain, is not merely an act of suicide, but one of madness.

But this is exactly what the degenerate political class in Britain has done, and their irresponsible actions are now costing the lives of ordinary people and our children.

Without any debate, vote or mandate of any sort, the political class has forced the most pernicious and disastrous policy ever imposed on the British people.

They’ve introduced to Britain a fifth column of Islamist jihadis hellbent on killing us all – innocent men, women, and children.

Stop all further immigration until we can sort out the politicians’ immigration shambles.

In the same way that George W Bush used the attack on 9/11 to curtail rights from US citizens in the name of their own safety, Theresa May is looking to introduce far-reaching internet censorship to punish all for the actions of murderous Islamists.

May and her Conservatives have no idea how to practically respond to the terror attacks in Britain because they only exist to do their paymaster’s bidding.