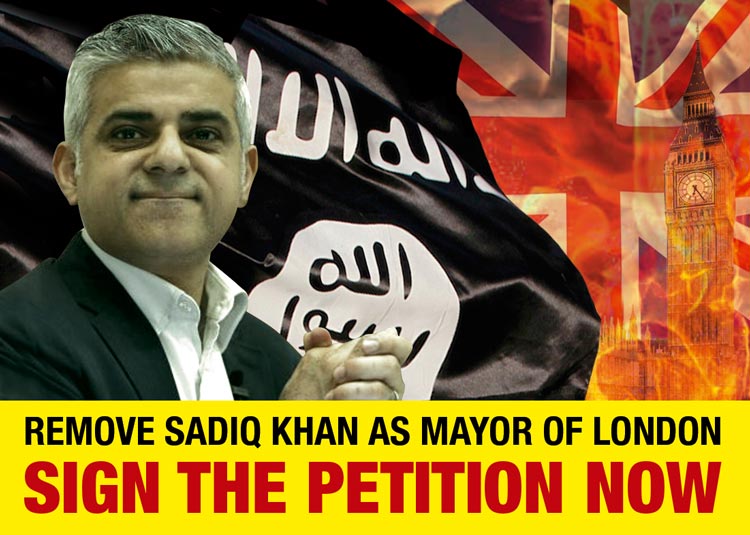 A petition demanding the removal of Sadiq Khan from the office of Mayor of London has received almost 70,000 signatures.

If the petition receives 100,000 signatures, MPs are obliged to debate the proposal in parliament – that’s where you come in…

Here we list a few of the reasons why this man is dangerous for the future of Britain and its ancient capital:

• Khan has been linked to Islamist extremists after it was revealed that his ex-brother-in-law is Islamist Hate Preacher, Makbool Javaid, who preaches anti-Western hate. [1]

• Khan has spoken at several rallies where Islamist flags have been flown and prominently featured, despite his claims that he has distanced himself from extremists. Watch the video here. Descriptions of the flags and the timings they appear in the video are listed in the description.

• Khan voted against the will of the British people to keep Britain under the tyranny of the EU – demanding that the city of London “has a voice at the table during those renegotiations” and prompting his Remain supporters to call for London to be made its own state independent of the United Kingdom. [3]

The petition states that:

• Khan held a meeting on Monday 31st January, with Muslim foreign diplomats from eleven states which have banned Israeli citizens from travelling to their countries – so much for being ‘moderate’. Moreover, six of the seven nations affected by President Trump’s temporary immigration ban have banned Israeli citizens from entering their countries. [4]

• Khan has declared his opposition to the democratic election of US President Donald Trump, compromising our ‘special relationship’ with our historic superpower ally.

• Khan supports a policy of banning the US President, (widely regarded as the ‘most powerful man in the world’ and the head of a state with historically strong links to the UK) from a state visit to Britain. [5]