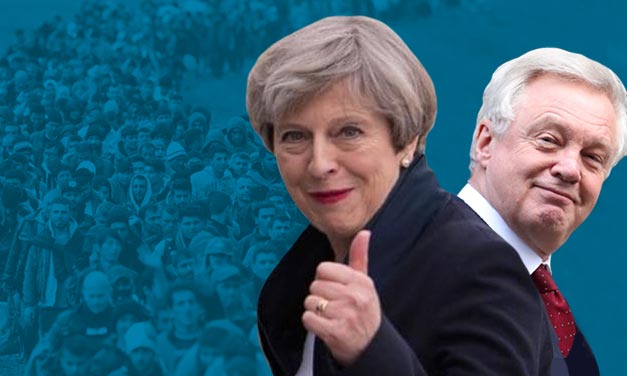 The guy who many wanted to see as the head of the Conservative party has responded to alleged efforts by EU commissar Karl Junker of trying to get him fired.

“It’s a compliment,” retorted MP David Davis, appointed by Prime Minister Theresa May to be ‘Secretary of State for Exiting the European Union’.

Much has been made about the Yorkshireman’s ex-service history, having been involved for a short time in the Territorial Army’s 21 SAS Regiment.

Among the cucks that comprise the Tories, David Davis appears to be among the closest to a traditional conservative.

But the question begs to be asked, what exactly are Conservatives conserving?

They facilitate the Islamic colonisation of Britain; continue the genocide of the British people through the pernicious mass immigration agenda; laud the catastrophic and divisive experiment of multi-culturalism as a good thing, and sell off any asset of the British people they can get their hands on to the highest international bidder.

She’s a politician in the professional sense – there to implement the policies of her paymasters for their benefit and their benefit alone and pretend it’s in the interest of the people.

When May thought it politically advantageous, she announced that she was a feminist.

You won’t hear anything more from May about her apparently feminist opinions because with the concoction of the poisonous brew of man-hating third wave feminism, the amount of women in Britain who still identify as ‘feminists’ has plummeted to a mere 7%.

It’s no longer politically advantageous for her, so she moves on to another position approved by the Political Correctness agenda.

You can’t blame her because today’s career politicians comprise the lowest of the low in societal groups, bred and conditioned as part of the political class to lie and shill for the biggest sponsor.

Selling out their people is all in a day’s work for cuckservatives.

At least the political left is open about their agenda to destroy our Western civilisation.