Why shouldn’t President Trump use a Judge’s ethnicity in what he says?

After all, the ethnicity of senior judges is a key factor in the USA as to why they are appointed in the first place.

The implicit, and quite correct, assumption must be that their ethnicity is bound up with their judgements. 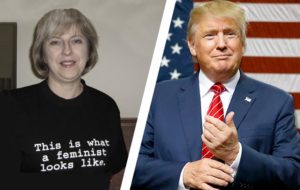 The present make-up of the Supreme Court justices is studiously anti-WASP.

Of the eight Justices, five are Roman Catholic and the remaining three, Jewish.

A distinguished lawyer, Robert Bork, was nominated as a Supreme Court Justice by Reagan and rejected by the Democrats for the ‘crime’ of wanting to interpret the Constitution according to the intentions of those who wrote it.

Bork was so viciously attacked and slandered that a new phrase, ‘To Bork ‘ was coined.

Bork’s book, Slouching Towards Gomorrah is a clear-eyed view of ‘modern liberalism and American decline’.

In a chapter headed ‘The Supreme Court as an Agent of Modern Liberalism’, Bork writes that:

“In its cultural-political role, the Court almost invariably advances the agenda of modern liberalism.

“When liberty and equality come into conflict, the Court almost always prefers equality, even in its modern, corrupt egalitarian form.”

“This is a philosophy, or mood which cannot be derived from the Constitution”, he writes.

“However, it is approved by the intellectual class which is well to the left of the American centre” and has control of the “Public Square”.

Bork notes that in Britain, it is the Labour Party and the intellectuals who are in favour of a written constitution and judicial review because “this development would shift a great deal of power from the British electorate to Judges who would better reflect the leftish agenda of Labour and intellectuals”

Cultural and social victories could then be achieved which would never occur in Parliament.

Much of this role has of course been assumed anyway by the ‘Human Rights’ courts.

From where do these Judges get these rulings? Asks Bork.

From nowhere but from inside themselves, he answers.

They are the product of their personal prejudices and preferences, nothing more.

So much for ‘Judicial independence’, then.

The American experience is a powerful argument against rule by judges, the naive faith people seem to have in them and in the legislation, such as ‘Human Rights; over which they have total control.