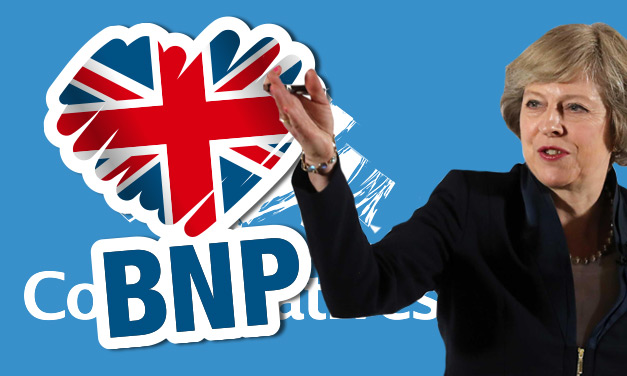 Once among the most hateful and vitriolic detractors of the British National Party, The Metro, has now conceded the BNP has led the way in British politics for more than a decade.

“More than a decade ago the BNP were on the fringe of British politics peddling a message that was considered fascist and hateful,” according to The Metro hack, Toby Mayjes.

“But fast forward to 2017, and it is being argued that those same pledges have become mainstream policies favoured by the big political parties to win elections.”

Even in 2005, the BNP was years ahead of the political Establishment in identifying to the key issues which matter to the British people, including the withdrawal from the EU, bringing back grammar schools, cutting immigration and increasing national security, he stated.

The fundamental difference, he strongly implied, was that while these policies are the at the very heart and soul of the BNP, the Establishment political parties have gone about stealing them as a cynical ploy merely for electoral appeal and gain.

The analysis reported on by The Metro and other mainstream media (MSM) outlets was carried out by ‘human rights activist’ Craig Murray, who penned a comprehensive comparison between the BNP 2005 Manifesto and the Conservative policies and pledges under Theresa May.

There was “little significant differences” between the two, Murray concluded.

His analysis highlights the latest in a free-for-all plundering of BNP policies by an ideologically-bankrupt collective of Establishment political parties clamouring for political relevance.

Just last week UKIP came under fire announcing that they had lifted a BNP policy to ban the full-face veil.

For decades, the MSM, as a controlled media mouthpiece for the political elite, was put to the task of denigrating, slandering and lying about the BNP, its members, officials, activists and policies in an attempt to dissuade the British people from voting in their interests.

It’s taken the other political parties more than a decade to catch up to where we were – back then!

Now even the BNP’s most rabid detractors are forced to face facts – the BNP has always led the way and continues to do so.

As Britain’s favourite nationalist political party, the BNP has done more than any other political party to influence both the national psyche and the trajectory of British politics.

There’s never been a better time to join the BNP.

It’s time you counted yourself among those bringing about change, making history and fighting to save our country in the knowledge we are – and always were – right!

If, for any reason you are unable to join a political party, or are already a proud BNP Member, make a donation today to help strengthen the BNP and ensure we can keep leading the way in British politics.