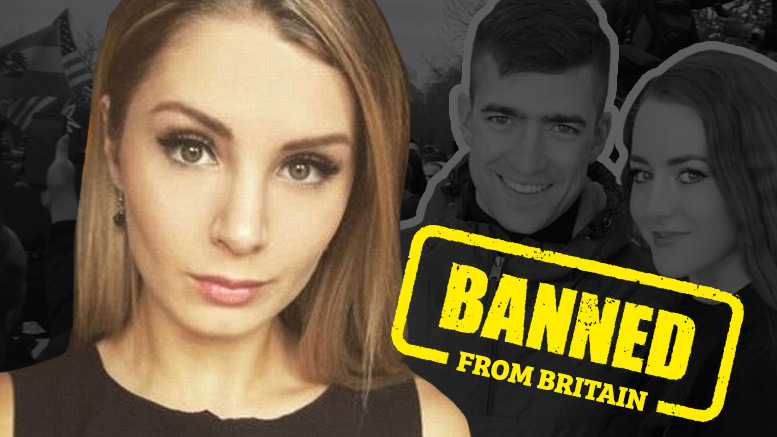 Rightwing ‘alt-Lite’ independent journalist Lauren Southern has announced that she’s been banned for life from entering Britain on trumped up ‘terrorist’ charges for undertaking a “social experiment”.

The 22-year-old Canadian was filmed handing out racist flyers emblazoned with messages like “Allah is a gay God” and“Allah is trans” in Luton earlier this year.

Yes, RT has now declared Islam a race – and one that people can convert to!

Political campaigner, Southern, said the stunt was a “social experiment” in response to an LBGT claim published in the Leftist Vice magazine that Jesus was a homosexual.

Police shut [her campaign] down after getting multiple complaints from locals.

In a video posted by Southern, police can be seen telling her that the “Allah is a gay God” project could lead to violence.

And we all know how terrified the government and the authorities are from the millions of Muslims they’ve brought into Britain.

They can also be heard telling her that, if she did not dismantle the stall and clear off, she could be arrested for a public order offence.

Southern’s ban came just days after Austrian political activist Martin Sellner and US independent journalist Brittany Pettibone were stopped at the UK border and detained for three days before also being expelled from the country.

It’s clear the authorities in Britain are running scared of something.

Any sensible individual might suspect it to be the Islamist terrorists that the authorities would consider a threat to their multiculturalism project, but given that they’ve allowed more than 400 ISIS jihadis to return to Britain while banning three young political activists from setting foot in the country, it’s clear where their priorities lie.

The fact of the matter is this:

Maintaining an unnatural social engineering project costs a vast sum of resources – paid for by the taxpayer, of course – just to keep a level of peace which exists effortlessly in any homogenous monocultural society.

Even pumping all those resources into their social engineering project, preventing the lit fuse from reaching the powder keg is an exhausting 24/7 task.

This, the government and authorities have decided, must be done by silencing anyone who speaks out against their insanely stupid and deadly act of allowing hundreds of thousands of Islamists with a death-wishing for Britain and its people into the country.

The draconian act of banning of Southern, Sellner and Pettibone and the relentless persecution of patriots in Britain is clear evidence of a political regime struggling to control the Frankenstein monster it has created.