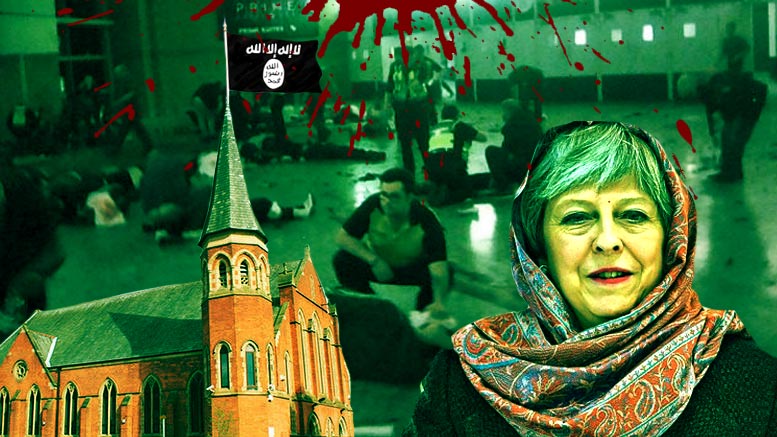 A BBC investigation has revealed that a mosque attended by the Islamist suicide bomber of a pop concert in Manchester is part of the Islamist Terror Third Column currently occupying parts of Britain.

The Manchester mosque Abedi attended – housed in an occupied Victorian church – has now been exposed as an Islamist terror base.

He is also heard issuing a call to action:

“Brothers and sisters, it is time to act – not only talk.”

Islamist apologist Shaykh Rehan was quick to resort to the Muslim practise of ‘taqiyya’, claiming that the imam’s words had been misunderstood by the ‘kafir’.

The BBC also revealed that at least five Islamist militants were dispatched from the same mosque to travel to Syria to fight alongside ISIS.

The occupation of Britain by an Islamist Third Column has been allowed by the politicians because it forms part of their globalist agenda.

Globalism is a political agenda which became popular among the political elite in the decades following WWII and seeks to deny people any sense of national, religious and ethnic identity in favour of ‘world citizenry’ claiming that all cultures are equal and ignoring timeless differences.

It’s failed horribly – in part, because all cultures are NOT equal.

The era of globalism is now coming to an end and fast being replaced by a renewed sense of nationalism across the Western world.

Don’t think that the tired old political class and their globalist media are going to give up just yet, however, they’ve made entire careers by serving their globalist masters and got filthy rich in the process too.

What use are they to a British people with a renewed sense of nationalism?

The BNP puts the interests of the British people first in Britain, every time!

With your help, the BNP can speed up the collapse of globalism and make Britain respected, prosperous, proud and safe once more – let’s make Britain Great again!

Join the BNP today, because together we’re stronger.