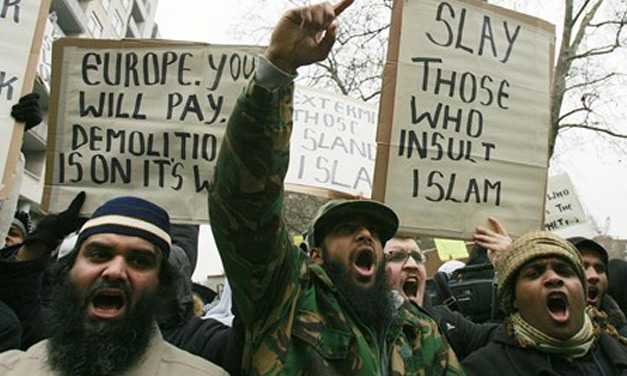 The Senior National Co-ordinator for Counter Terrorism has confirmed that police are now arresting terror suspects “on a nearly daily basis.”

The Commissioner delivered his statement after a house in London was raided by anti-terror cops and a burqa-clad woman shot in an operation to foil an active plot.

So mentally deranged was this burqa-clad Islamist, that she yelled at paramedics trying to treat her wounds: “Don’t touch my body!”

The raid followed the apprehension and arrest of a bearded Islamist migrant with a rucksack filled with knives.

The estimated amount of “committed Islamists” being harboured in Britain, hell-bent on killing Brits and turning our country into an Islamist state was “between 6,000 and 10,000”.

The BNP can reveal that the figures far exceed that.

The revelation has been met with shock by several mainstream media (MSM) outlets with one calling the findings “astonishing”.

“This shouldn’t come as a surprise to anyone since the British National Party has been warning of this for decades.

“It certainly doesn’t come as a surprise to us and it wouldn’t have come as a surprise to Enoch Powell, who warned of the dangers of the pernicious and destructive Mass Immigration project of the political elite, and I can tell you now that this is set to get much, much worse, with many more British lives being lost.

“By the standards of the United States, by harbouring this fifth-column of Islamist terrorists the United Kingdom qualifies as a ‘rogue state’.

“The BNP is here to ensure the British people have a voice!

“We’re here to pile the pressure on the corrupt political class which has actively abetted bringing this catastrophe down on the British people.

“The stark reality is that it’s got to this point; if you’re not doing your bit to further the BNP campaign to save our country and preserve everything we hold dear, you’re part of the problem.

“We need you to get involved today, join your local branch or make a donation so that we can expect our campaigns.”

The BNP is committed to stopping and reversing the Islamisation of Britain, banning the burqa, stopping all future plans for new mosques, deporting Islamist Hate Preachers and removing the Politically Correct shackles that prevent our police from hunting down all those involved in Muslim Rape Gangs across Britain.