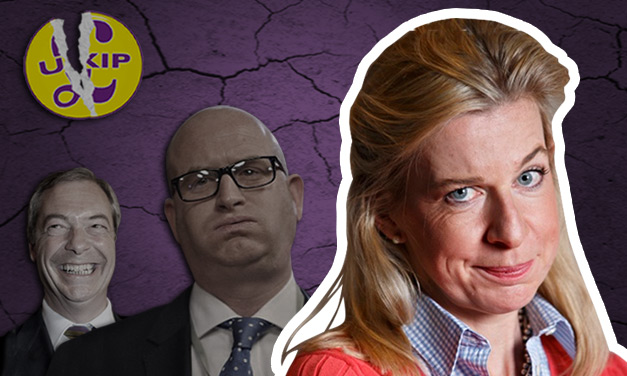 Outspoken radio jock Katie Hopkins has a message for UKIP following their wipe out in the local elections last Thursday.

“You did your country proud but your job is done.

It’s a sentiment echoed by the BNP.

Despite misplaced hopes by a small demographic of civic nationalists that UKIP might become a kosher ‘nationalist’ political party free of the negativity heaped on the BNP by the MSM (mainstream media) and fake news outlets over decades, the facts remained the same:

UKIP was always a single issue party and Nigel Farage knew it. However, therein lay its strength.

Under the leadership of the remarkable and charismatic Mr Farage, and with an MSM keen to weaken the BNP vote by promoting UKIP as a kosher alternative, the party succeeded in acheiving its raison d’être – a referendum on Britain’s membership of the European Union.

One needs to know when their war is won.

Brave leaders know when it’s best to step down and let others carry on the good work, continued Mrs Hopkins.

“Today, it is time for UKIP to do the same.

“It is time to walk away.

“And last night (6th May) this proved to be the case for the party;

“One: UKIP’s top tier in Rotherham resigned in protest at the direction of the party under Paul Nuttall’s leadership, the Yorkshire Post reported.

“Two: UKIP lost ten seats in Lincolnshire, where party leader Mr Nuttall has decided to run in the General Election.

“It lost a further eight seats in Hampshire and six seats in Essex.

“Three: Elections expert Michael Thrasher said UKIP’s share of the national vote could fall as low as three per cent, down from 22 per cent in the same contests in 2013.

“UKIP has lost everything they’ve been trying to defend.”

After announcements that UKIP intended to reveal new hardline policies to earnestly address the threat of the Islamisation of Britain, UKIP’s gaff-prone leader, Paul Nuttall, fell over himself to deny that it was the case.

Their calls for less immigration also fell woefully short of any relevance, with flip flopping on the issue raising more concern from supporters than confidence.

The BNP is a WHOLE different animal.

The BNP has been tempered through the flames fanned by of the MSM, Soros-foreign funded ‘anti-fascist’ hate groups, the whole crooked political Establishment and their political police force.

Our trial and ordeals have made us stronger in conviction and resolve than any other political party.

The opposition, by contrast, are beginning to see their world falter.

Their hate words designed to silence and discredit opponents and at one time resonated with credulous and naive public have now been so massively overused to be rendered practically innocuous.

It was only a matter of time, of course, given the fact that the political left never had any argument and fell back on name-calling every single time in an attempt to shut down debate.

The BNP weathered the brunt of it, and in the firing line grew tough and strong.

After years of masquerading as a nationalist political party and actively trying to take a significant section of traditional BNP voters, UKIP has now run its course.

The BNP is set for a resurgence… and YES, you should to to be a part of it!