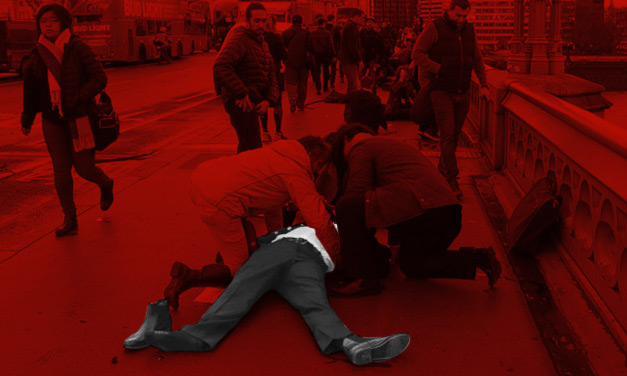 The mainstream (MSM) has blamed the slaughter of 4 people and the severe injury of many more in the latest London terror attack on ‘white people’.

After arresting 11 suspects, in the aftermath, before releasing 10, police announced that they had no clear motive for the massacre.

The MSM wasted no time in putting into gear their racist anti-white agenda.

The Daily Mail constructed a narrative that the four white people murdered were indirectly responsible for their murders because the killer had allegedly suffered ‘mild racism’ when attending a British school.

The Daily Telegraph took up the narrative too:

‘First picture of Khalid Masood reveals how he went from football-loving teenager to London attacker,’ seemingly discounting any radicalisation the Muslim convert may have experienced attending any one of the countless hate-preaching mosques in London.

Masood’s criminal record dates back to 2003.

After he had stabbed a cafe owner in the face with a knife, the savage appeared in court where he told the judge that he attacked the man because the village had ‘ostracised’ him.

The nature of the crime speaks volumes, is it any wonder villagers would choose to distance themselves from someone with such a temperament?

BNP Chairman, Adam Walker, was quick to slam the MSM:

“This narrative is a construct of ‘structuralism’, a leftist social theory which dictates that individuals are created by society; therefore they’re powerless to think for themselves and can be absolved from blame for their actions.”

“The fact that it’s been the two leading ‘rightwing’ media outlets that reported this in this way proves what many have known for decades; that even the mainstream political right has been completely and totally appropriated by Political Correctness.”

“They’ve made it crystal clear that they’re operating a policy of institutional racial discrimination against white people, and given any opportunity they will cynically use the innate decency of white people against us by accusing us of something we all consider immoral.”

“The mainstream media is not only absolving the murderer but labelling him the victim, marking a new level in their racially motivated attack on all white people – it’s truly sickening, and it’s something the BNP will continue to expose and hold the media accountable to.”