As Donald Trump enters into his Presidency, we may reflect that Hilary Clinton wasn’t the only loser in the United States Presidential election. Another was the MSM.

The print and broadcasting media and the Hollywood fantasy factory in the US were revealed in all their grisly reality as pretty much just propaganda machines for the left -liberal elites. 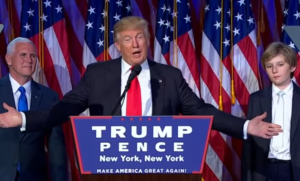 Trump won in spite of the most concerted efforts ever seen to denigrate and to smear a Presidential candidate.

This reveals just what so many people think of the US media. Not much.

The British media was and is no better.

Prior to the election, journalists, presenters and others in the ‘balanced and impartial’ (As it describes itself) BBC appeared to feel no need to conceal their loathing for Trump.

They came out with sneering remarks about the future President; apparently thinking that everyone would agree with them.

They thought this; it seems obvious, because most people in the BBC do agree with them.

Because they live and move in a wholly left-liberal bubble they have been unable to conceive that others may think differently.

If this thought has indeed crossed their minds, these despised others are simply dismissed as an insignificant minority of ‘racists’ etc. (Fill in a few leftist terms of abuse here).

As an example, when John Lewis, a black Congressman and Civil Rights ‘Saint’ said he was not attending Trump’s Inaugural because it was not ‘legitimate’, the BBC headlined their report as that Trump’s riposte was ‘slammed’.

Political Correctness decrees that the black leader of the 1960’s Selma march is beyond criticism.

The BBC could have said that William’s contentious and anti-democratic stance was slammed by Trump, who told the Congressman that he should turn his attention to his district which was ‘falling apart’ and crime ridden – which it is.

Since the 1960’s when Williams and his ilk began to control Selma, it has become by some measures the most dangerous place in the entire USA.

But that is not the BBC’s way, is it?

We can look forward to years of this kind of biased and spun reporting on Trump.

The realistic, anti-PC plain speaking of such a major figure has come as a terrible shock to the Cultural Marxists who have had such a death grip on the West and they will do their best by constant sniping and biased reporting to bring him down.

It is highly significant that Trump conveyed his opinion of Williams by Tweeting.

He is deliberately by-passing the MSM as he did in the election campaign and the MSM hate it.

They are trying to block Trump’s move to give White House accreditation to alternative Internet outlets like Breitbart and InfoWars.

And they are mounting campaigns against ‘fake news’ ie pushing for censorship, as if their own ludicrous bias was the unvarnished and objective truth.

The public is moving away from the MSM to the internet for its news and views.

And as the circulation of the print media plummets and the influence of the BNP’s other enemies in Cultural Marxist outlets like the BBC declines, we can only cheer.

Politics in the future will be dominated by the Internet and the social media.

The spin-merchant middlemen of the MSM are being cut out of the equation, just like so many other middlemen professions in the economy.

Power to the People!