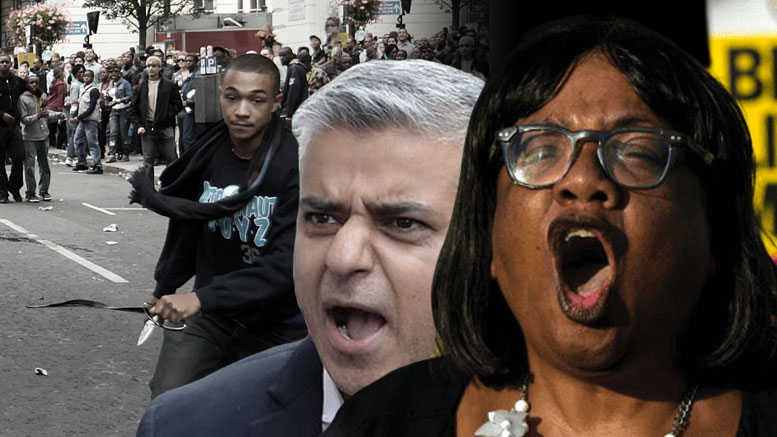 Britain’s most racist woman, Diane Abbott is at it again, this time demanding that police stop-and-search White people for Black crimes.

The sky-rocketing level of ultra-violent crime committed by the politicians’ ‘Black Britons’ is a problem for all.

So much so that even Labour London Mayor, Islamist Sadiq Khan, who banned police from using stop-and-search prevention measures, was forced to backtrack on his policy.

For Abbott though, the huge concern is not the murderous nature of these new arrivals to Britain, nor the lives of their victims, but the fact that police official figures prove that her precious Black community is overwhelmingly committing these heinous crimes.

Of course, in a Leftist’s world, facts are there to be falsified – and Abbott is on a mission to do just that.

Utilising her influence as Shadow Home Secretary, Abbott has declared that these ‘racist’ facts must be covered up at all costs.

To do just that, she has demanded that white people be stopped and searched in their thousands so that official figures can be manipulated to create the false impression that there’s ‘nothing to worry about, because we’re ALL committing revolting crimes.’

If Abbott gets her way, you will face police harassment on a scale never before seen in our country.

Whatever age, whatever business you are undertaking, with or without your children or grandchildren, you’ll be stopped and harassed by police under the presumption that you’re planning to throw acid in someone’s face, brutally rape someone, mug someone or stab and hack someone to death on the street!

It doesn’t even matter what country you come from – if you’re White, to balance the books, Abbott needs you as part of her criminal suspects quota.

With enemies like Abbott attacking the British people, a strong BNP is needed to fight for the interests and rights of OUR people.

As a committed patriot, your support now is crucial to help us win this fight!

Join the BNP online here today – because together we’re stronger!