‘Sick’ Hillary Clinton has branded voters “racist, sexist, homophobic, xenophobic, Islamophobic” in a vile rant before almost crumpling to the pavement, being dragged into a van by bulky minders and whisked from the scene. 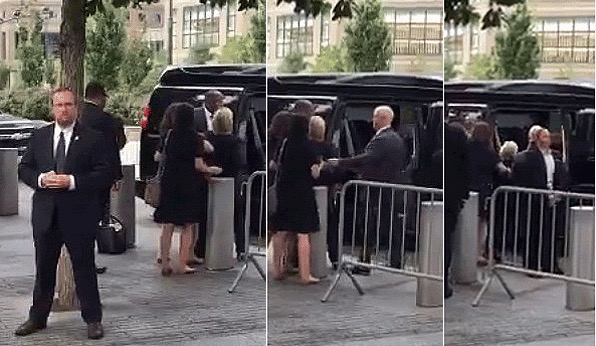 It’s an event which could serve as a metaphor for the whole rotten political edifice in the West – sick, frail, mad and desperate.

The hateful presidential candidate spat her venomous bile at the common people during a fundraising event held in a restaurant on Wall Street attended by a host of multi-millionaire Establishment ‘slebs’.

Hillary Clinton characterises the political elite in the West as a whole; paid-for and pocketed; arrogant and out-of-touch; contempt for the people and hypocritical on an almost inconceivable level.

Clinton is sponsored by a whole host of international banks, including Goldman Sachs, and shady billionaires businessmen such as the infamous and nefarious George Soros.

The same people who have bought Clinton, also sponsor the Establishment political parties here in Britain and the EU.

Is it any wonder that that the obnoxious name-calling and pro-Immigration and Islamist rhetoric of sick Clinton is echoed by successive Prime Ministers and Establishment pundits in Britain?

In stark contrast, the British National Party is funded solely by the generosity of the British people. It means that the BNP is the only truly independent political party in Britain, free to put the interests of British people first in Britain every time.

It’s the very reason why the corrupt political elite and their Establishment are desperate to get rid of the BNP, using everything at their disposal and stooping even to slander and politically-motivated persecution and harassment to try to stop us.

Brexit is the latest catastrophic error of judgement by this rotten political elite. They’ve been wrong on everything, while the BNP has been proved to be correct on everything!

Isn’t it time you stood up for what is right and said ‘enough is enough’ in the face of the Political Correctness and put the British people first in our native island nation?