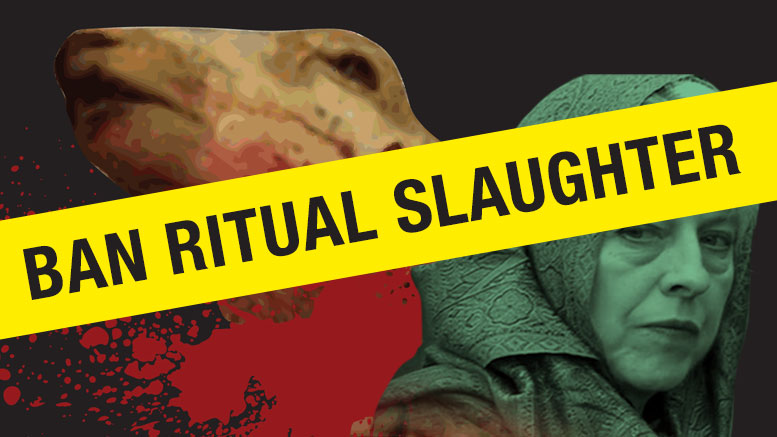 The recent deal, worth £25 million, is to ritually slaughter masses of animals in compliance with Sharia (Islamic law) and ship the halal meat to the Islamist state of Saudi Arabia over a period of 5 years.

Many thousands of animals will have their throats slit and be slowly drained of their blood in an excruciatingly painful, horrific and barbaric Islamic ritual to meet Muslim demands.

Currently, British law dictates that animals must stunned before being slaughtered to minimise their trauma and suffering.

Certain religious groups including Jewish and, of course, Muslim communities are afforded by the government special treatment and are not required to stun animals before slaughter.

Even the RSPCA, which has been heavily criticised by the BNP for years for refusing to condemn the horrific practise of halal slaughter, has finally spoken out and condemned May’s deal.

As a nation of animal lovers, we Brits pride ourselves on the fair and humane treatment of animals, including livestock.

Allowing the practise of mass ritual slaughter of animals in Britain for profit, and doing so without first stunning the animals, is the latest betrayal of British people by Theresa May.

Religion is NO EXCUSE for horrific cruelty to animals.

The BNP is ONLY political party which fights for the fair treatment of animals and staunchly opposes the ritual slaughter of animals – halal and kosher.

Isn’t it time YOU took a stand to fight for what is right?

Join the BNP today – because together we’re stronger!