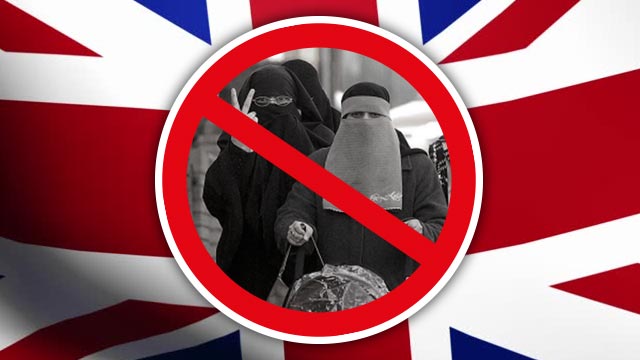 The burqa is a symbol of colonisation and the wearing of it is a conscious refusal to integrate with Western culture – the society they have CHOSEN to liven in.

The burqa is threatening and offensive and has now place in our free British democracy.

The burqa is worn by certain groups of the Islamic community.

In the West, the word is often used to describe both the full veil concealing the eyes (burqa) and the full veil with an eye slit (niqab).

The burqa is NOT required by Islamic law or the Qu’ran and is, therefore, a cultural choice rather than a religious requirement.

The burqa is threatening and offensive and the British National Party believes that purposefully concealing one’s identity and facial recognition equates to Cultural Terrorism and breaches all security measures.

Islamist terrorists around the world have used the burqa to escape police detection and conceal their identity.

In Britain, in 2013, Islamist Mohammad Ahmed Mohamad with links to Somali terror group Al-Shabaab escaped police by entering a mosque in western clothes and leaving in a burqa.

The message to those that wish to wear the burqa is simple, go and live in a Muslim country where you can practise.

The British National Party is calling for an outright ban on the wearing of the Burqa.

Austria, Switzerland, and France have already introduced a ban on the burqa and niqab.

The British National Party is the ONLY political party in Britain with the common sense, courage and campaigning for the same ban to be introduced in the UK.

The BNP will BAN THE BURQA.