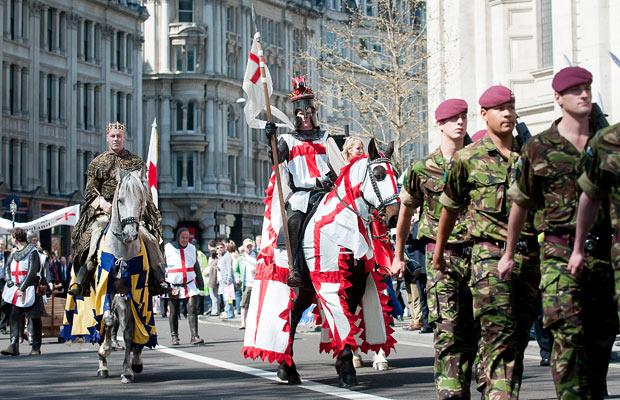 The British National Party wishes a happy St George’s Day 2018 to all those of English descent around the world.

St George is the patron saint of England as well as Serbia, Portugal, Venice, Beirut, Malta, Ethiopia, Georgia, and Lithuania.

A patron saint does not have to be from the country they were born in – they just need to represent the characteristics the kingdom wants to project to the outside world.

It’s believed that Saint George was an officer in the Roman army under Emperor Diocletian.

Emperor Diocletian had St George tortured and then beheaded when he would not renounce his faith in Christ.

Stories of his faith and courage soon spread throughout Europe.

During the Third Crusade in the 12th century, Richard I placed himself and his army under the protection of St George.

He also adopted the emblem of St George, a red cross on a white background, which was worn as a uniform and later used on the English flag.

In Shakespeare’s Henry V, Act III, King Henry V finishes his pre-battle speech at the Siege of Harfleur with the memorable phrase:

A damning Labour Party report from the English Labour Network says that Labour activists are frightened to celebrate St George’s Day 2018 or even mention the word ‘England’ out of fear of being called ‘racist’.

In 2014, Emily Thornberry resigned from Labour’s front bench after sending a ‘snobby’ tweet during a by-election.

She apologised for the message, which showed a terraced house with three England flags, and a white van parked outside.

Additionally, Jeremy Corbyn has stolen a British National Party policy, which is to make St George’s Day a national holiday.