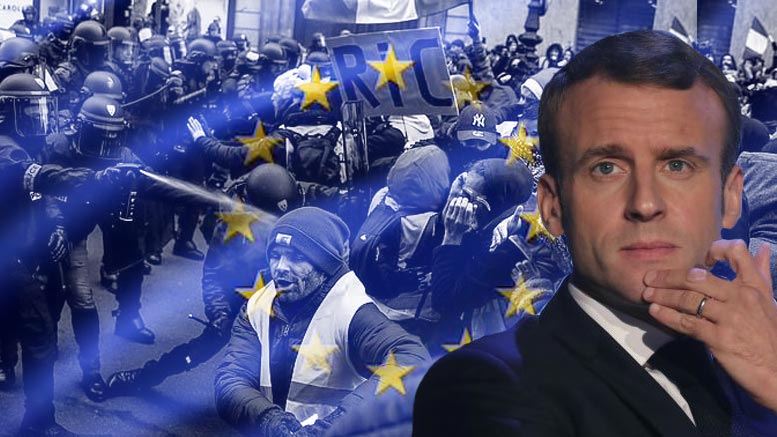 Desperate French President, Emmanuel Macron, has readied his security forces is to smother the centre of Paris with a ‘last resort’ chemical weapon in a bid to keep protesters away from key buildings, it has emerged.

France has been hit by months of civil unrest and violence after workers, in their masses, donned ‘yellow vest’ hi-visibility jackets during their protests against the oppressive globalist policies of ex-Rothschild banker and arch-Globalist Macron.

What are the protests about?

In a nutshell, the globalist policy of shipping jobs to the Third World has resulted in French workers increasingly being forced to find work further afield and commute the long distance – mainly to the urban areas – at a substantial personal cost in fuel.

With French workers already struggling to afford this cost in fuel, Macron then announced an increase in fuel tax.

To add insult to injury, and in a typical show of globalist arrogance and disconnectedness, the French President then dismissed the entire protest as a “hateful mob” comprised entirely of “thugs”.

Yesterday, into the third month of protests, the French President ordered the arrest of the Yellow Vests’ leader Eric Drouet allegedly for holding an ‘unauthorised protest’.

Now it has been revealed that Macron has authorised police to use chemical weapons against his own citizens should they refuse to submit to globalist tyranny.

The debilitating powder – which can be spread across an area the size of six football pitches in just ten seconds – highlights the extreme draconian measures to which EU leaders and their globalist elite will undertake to ensure their agenda is forced through despite strong objections by the people.

Macron is the last hope for an increasingly desperate and fragile EU.

The BNP is the original anti-Establishment and anti-EU political party in Britain, and recognises that the corrupt old political class answers only to globalist interests – at the expense of the British people.

The BNP needs your help to step up the pressure on the corrupt and despised old political class from making indigenous peoples in Europe and Britain minorities in their own homeland.

The BNP is the last political line of defence in the fight against government tyranny and globalist oppression.

Isn’t it time you joined the resistance?