The BNP in Lincolnshire point to an East Midlands Educational advertisement to illustrate how children are and picked based on the colour of their skin, disturbingly confirming in 2017 that ethnicity is the primary factor in education.

The attached advertisement showcases an event to be held in Lincoln in January 2017 by Human Scale Education with the aim of encouraging belonging and a sense of community. 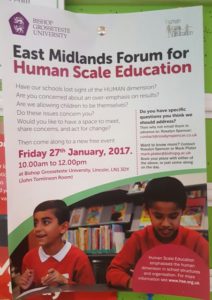 HSE also aim to put children’s relationships at the heart of schools and is a reform movement committed to small scale learning communities.

The BNP believes every child with ability can aspire to reach a level of success and an advertisement featuring a boy and a girl or a mix of ethnic or disabled backgrounds would meaningfully represent Britain’s 2017 schools.

However, HSE decide in conjunction with Bishop Grosseteste University to produce an advertisement selecting children based on the colour of their skin with 2 Asian schoolboys featured.

This is perhaps due to the desire of the HSE to be nothing more than a politically correct box-ticking quango funded by the taxpayer.

The BNP refers to the HSE website which states that they are committed to the values of democracy, justice and respect.

Consequently, why is ethnicity displayed in such a biased way in this advertisement, potentially alienating children not from Black and Asian communities?

The BNP believes educational related advertisements should feature accurately the diverse backgrounds of those concerned in The East Midlands which in this case is falsely portrayed as being 100% from an ethnic minority background.

The BNP receives a plethora of contact from the public with complaints of how marketing campaigns do not accurately portray the ethnic mix of Britain.

We as a party believe British children in British schools should carefully be represented in promotional material with the true representation of the background of children being sensitively displayed.

Equality legislation means mainstream educational environments should be attended by a mix of children from ethnic backgrounds so it simply inappropriate to solely feature Black and Asian children in advertisements.