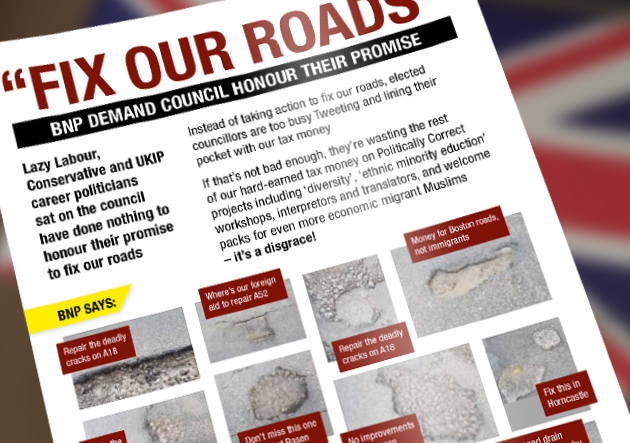 A full A4 colour sized Lincolnshire Leaflet entitled ‘Enough is Enough’ featuring the undeniably shocking condition of our roads and the abject failure of Lincolnshire Council is available now.

The BNP – The non establishment party show in this large premium leaflet, that it takes on the corrupt, entrenched and detached political elite who are interested in preserving their own power and lining their own pockets.

With UKIP disintegrating and the roads disintegrated, 16 photographs provides a stark reality of the shambolic state of not just the road network but the heightened safety concerns for road users.

With partial night lighting being introduced Lincolnshire Council Tax payers are facing the reality of miles of dangerous roads which will be unrepaired , untreated and unlit this Winter.

The alternative more ‘raw’ remixed leaflet format details the number of critical issues where the BNP have been proven to be right,  informing the reader that The British National Party is an effective and resilient political party offering a distinct choice for the future of our people.

The Lincolnshire Branch were provided with the inspired concept by Branch Organiser Robert Ashton who has provided over the last decade some inspirational work for the party and who now heads up an uprated local team in Lincolnshire.

For over 6 months the party in Lincolnshire has invested in extensive dialogue with voters and supporters which has culminated in the twin launch of 2 colour leaflets in 2 sizes offering 2 approaches to today’s priority issue.

Many thousands of this release have been produced to capture support for the Party and supporters and members are invited to assist with its distribution.

The Lincolnshire Branch would be interested in hearing from pro active activists in the county who wish to join the energised team . Additionally Donations of £20 will fund a further 1000 leaflets so please assist and make its further distribution a platform for success.

The matching themed leaflets are an exceptional tool in the recruitment drive focusing on local politics and local issues.