The BNP Lincolnshire Coastal Branch, meeting with local people over the Christmas period, has received huge support for its credible campaign to ‘Secure Our Borders’.

In Lincolnshire, the housing of many Syrian ‘refugees’ and the influx of Eastern European migrants has led to many voters agreeing that Britain needs the BNP! 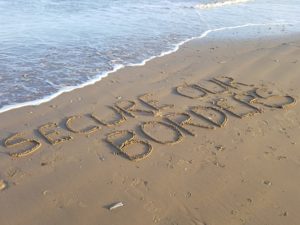 Residents tell us they agree that it is time to Secure Our Borders as a result of the following:

2016 has been a year of Islamic terror attacks in Europe and there is an entire network of terror groups threatening the UK.

2016 data and statistics confirm that illegal immigration into the UK is at an all time high and many of these illegals simply stay.

2016 has seen over 1000 women in Pakistan killed in honour killings as a result of Sharia Law.

The BNP SAYS NO to Sharia Law and NO to the abuse of women. It’s an evolving threat in the UK!

2016 proved that the British public want to see an end to Mass Immigration following the credible EU referendum result.

The public want certainty that Immigration must halt.

2016 confirmed that the tidal wave of illegals and dangerous criminals entering the UK is accelerating.

People agree with us – It’s time to close the doors!

Like many folk talking to us, it’s time to put the talk into action and time to Join the BNP!

If residing or working in Lincolnshire, a BNP Meeting is the ideal place to meet like-minded patriots.