Poland has overtaken India as the most common non-UK country for people living in the Britain according to the Office for National Statistics (ONS). 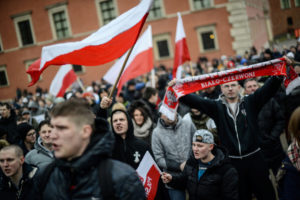 ONS immigration stats are huge, still near records – 327,000 for the year to March.

The Office for National Statistics has released new migration figures for the UK.

Britain is now host to 3.2 million non-UK born residents from the EU.

According to ONS, there are 5.4 million non-UK residents from outside of the EU.

In the words used by the ONS :

“There was a statistically significant increase in the non-British national population of the UK between 2014 and 2015, increasing from 5.3 million to 5.6 million (an increase of 4.2%).”

“The population of the UK continued to increase between 2014 and 2015, driven by significant increases in both the non-UK born and non-British national population of the UK. Poland is now the most common non-UK country of birth, overtaking India for the first time. The number of Polish born citizens living in the UK has continued to increase since Poland joined the EU and the number of UK residents born in Poland was eight times higher in 2015 compared with 2004.

There’s media speculation that the government wants to introduce a visa scheme for EU nationals seeking unskilled work, in particular, those in the agricultural sector.

The BNP demands that all EU nationals – with the exception of the Irish and Maltese who the UK has separate agreements with – be subject to visas like the rest of the World.

Only the BNP is the only political party you can trust to stop Immigration.

Donate to the BNP