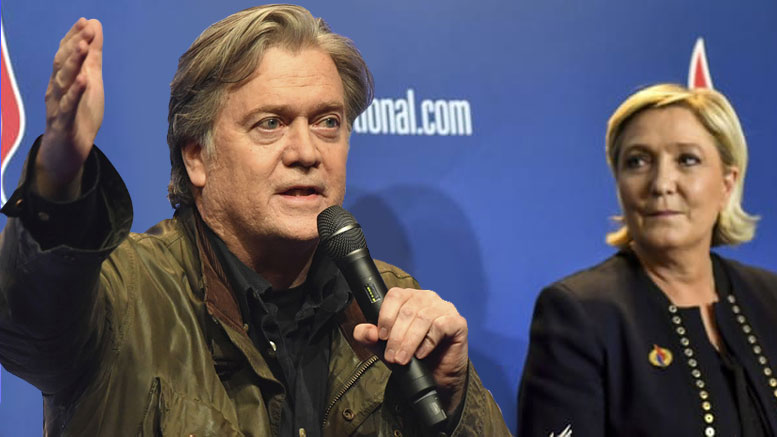 Steve Bannon has told the French that being branded “racist” by the hateful Leftwing press and the rotten old Establishment should be worn “as a badge of honour.”

The former Executive Chairman of Breitbart news and former aide to the White House is currently on a tour of Europe energising the anti-Establishment popularist movement and rallying support.

Bannon is rumoured to be advising the French Front National (FN) in a rebranding exercise.

Speaking alongside Le Pen at the Party’s national conference in France, Bannon addressed the party faithful:

“I came to Europe as an observer and to learn.”

Bannon’s France address was his second speech in Europe after an engagement in Switzerland and his renewed activity has certainly rattled the Establishment.

In this week’s issue of the Leftwing German publication, Stern iterated their fears that “Dark Lord” Bannon threatens to mobilise and unite the anti-Establishment popularist movements across Europe and “give the fragmented Right in Europe a common ideology and rhetoric.”

Having earlier dismissed him, Stern hack Gernot Kramper changed his tune by confessing that, owing to Bannon’s ability to move a crowd, the man is “as dangerous as ever” to the powers-that-be and their media operatives.

The “frenetic applause” he received at the FN conference was further proof of his “impressive potential,” according to Kramper.

Bannon is widely considered to have played a crucial role in the election of President Trump by way of harnessing the readership of Breitbart news and providing advice to the campaign.

His sentiment echoes that stated in the latest issue of IDENTITY magazine on Political Correctness.

Leftist hate-words are “only as strong as you allow them to be.

“Remain unfazed and others, who fear speaking out for receiving the same treatment, will be emboldened to follow your lead in doing the same.”