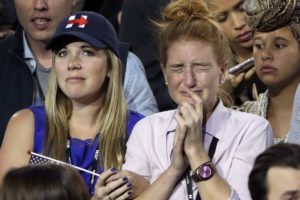 The march of ‘progress’ towards a one-world of mind-numbing sameness seems to have been stopped in its tracks in 2016.

That year will go down as marking the high-watermark of the Cultural Marxism in the West.

From now on, history will show it as retreating.

Brexit, Donald Trump, the vote which toppled the Italian Prime Minister and may lead to Italy’s exit from the Euro and possibly the EU – these are giant reversals for the Cultural Marxist/Libertarian globalising elites.

All three of these highly significant events were revolts by ordinary people against the futures planned for them by their masters in the political classes.

All three of them were made possible because they were kinds of referenda, so by-passing the sham democracy of party politics as currently practiced.

Brexit and the Trump election were also significant because the results shocked the elites to the core. (The Italian result was widely anticipated).

One good reason for this is the almost total control over the political and educational establishments and the media by Cultural Marxists.

Left fascism has ensured that non-PC voices have been routinely and systematically excluded from public forums such as the BBC, following the ‘no-platform’ doctrines of Cultural Marxism.

Left ‘liberals’ have vilified anyone who has dared to speak up against them, risking loss of employment and/or professional standing by so doing.

The resulting public silence and false picture of majority opinion created by themselves through such means has had the effect of lulling the left-liberal political classes into a false sense of security.

Living in a self-created bubble of delusion, they ignored opinion polls (if they noticed them at all) which continued to show widespread opposition to their agenda.

That’s because they thought and think that the ordinary people out there were captives of a grossly unfair electoral system which favours the entrenched elites.

These elites will continue to use their muscle to try to stem the retreating tide. But their time is up.

From its emergence as a real force in the 1960’s to the present day, Political Correctness has run its course.

One explanation as to why the self-described forces of ‘progress’ now seem to have been halted in their tracks is to draw on the philosopher Hegel.

In the latter’s terms, the extremities of racism of the Nazis and harsh social Darwinism is ‘Thesis’.

In this analysis, we are now headed for ‘Synthesis’ – a working out of the two into new ideas.

This ‘synthesis’ may very well turn out to be not unlike the state of affairs obtaining in Britain before the onset of Political Correctness.

Specifically though, modern left/liberalism is the attempt to deny human nature and to liberate the self from any kind of collectivity –from national/ethnic identity, from religious/cultural identity and so on.

But this attempt is doomed to failure. For human beings need collectivities; it is part of their identity as social animals.

And human attachments to place, to peoples and to cultures are rising to full expression once more because of this human need.

Ironically, liberals tend to express their independent selfhood in the same ways.

The swelling up of sentiment (or ‘populism’ as the sneering elites like to call it) is in the face of political class attempts to submerge or eliminate it as dictated by ‘reason’.

Unfortunately for these political classes, their version of ‘reason’, which involves universalism and so ‘One World’, globalisation etc does not take into account these human needs either fully or at all. And so it must fail.

And political correctness denies objective truth. People’s eyes and experience, their own and that of all previous generations deceive them, they are told.

But people search for and in the end see the truth. They see the realities.

And they know that Political Correctness requires people to live a lie.

Diversity brings social division and weakness, not strength and should be condemned, not ‘celebrated’.

Ethnicities differ, cultures and religions are not to be equally esteemed, personal preferences regarding them are not ‘bigotries’ but humanly reasonable. And so on.

Thus for example, ordinary people can see clearly that Islam is an utterly alien malignancy and a serious menace to the western way of life.

But as Geert Wilders, the leader of the Dutch Party for Freedom said of the political class of Germany following the Christmas market bombing:

“Out of political-correctness, they have deliberately turned a blind eye to Islam.

“They have refused to inform themselves about its true nature.

In addition, although Political Correctness has been weakened by the hostility of patriotic realism, it has survived.

But realism has played a card which is winning the game: ridicule.

Political Correctness is metastasising to ever more absurd levels of unrealism.

For example, human beings cannot decide what sex they are. That is decided for them by the chromosomes in every cell of their bodies.

But the denial of nature as part of the drive for non-attachment to everything in the interests of equality and the sovereignty of the individual has reached the point where it is asserted that one can and should choose one’s ‘gender’.

As George Orwell remarked, “some ideas are so stupid that only intellectuals believe them.”

Historians and others in the future will look back on the rise and increasing lunacy of Cultural Marxism in the West as a case study in the development of the madness of fanaticism, similar to the witch hunts of New England and elsewhere.

Ordinary, common-sense people who have not allowed themselves to be initiated into the Cult of Equality and the arrested-adolescent dreams of utopian progressivism look on this kind of thing with anger, bemusement, but also sometimes with not a little amusement.

And therein lies the inevitable demise of Political Correctness.