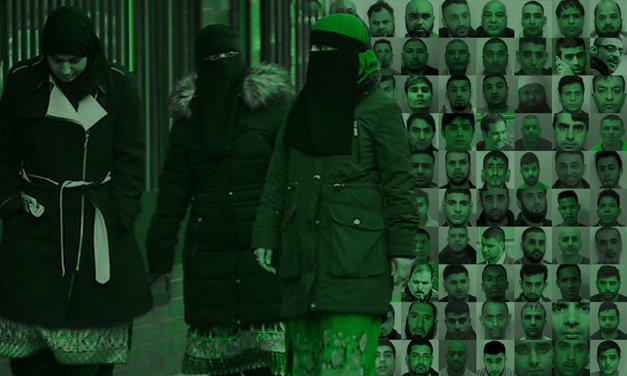 The wives of a convicted Muslim Rape Gang have said that the young white girls targeted by their husbands are to blame for their own torture and gang rape because they are “filthy”.

Suju, the wife of a jailed Pakistani gang rapist, explained that she was afraid of her husband, but said of his white victims:

“Filthy. How they dress. They have no shame, no fear of Allah.”

In an interview with the Mail on Sunday, she was asked if it was ever okay to hurt young girls.

“No. You can’t hurt people. Allah does not want that.”

However, she then added:

“But it is the girls who should be careful. They did something to him, maybe bad magic. I am now alone, no money, no life.”

According to Suju, it is the girl’s fault their husbands are incapable of restraining themselves.

One might ask why then is it the case that rape by white Western men is comparatively rare and the organised gang rape, torture and forced prostitution of young girls is practically unheard of.

Add the fact that Muslim Rape Gangs prey on children of another race and community, and any comparison is flawed.

Could it be a racial difference?

Is it the average 84 IQ of Pakistanis?

Or does the problem lie with an interpretation of Islamic lore and scripture the result of which makes that community entirely at odds with Western civilisation.

According to this wife’s arcane superstitions, it’s the practise of witchcraft by white girls which spellbinds ‘men of Pakistani heritage’ to prey on them and take them as slaves for men of all ages in the Muslim community.

But be assured, she’s the victim because her morally bereft, rapist husband has been jailed.

This is the level of sentiment in these Muslim communities; zero sympathy for any other social group and utterly devoid of any wider sense of community… yet the politicians claim these people can be integrated into a homogenous nation state and are our fellow countrymen.

Three other Pakistani Muslim Rape Gang wives took part in the interview and explained their warped notion of sexual consent and rape.

Two were described as “virgin brides” from Pakistan, while one was a Pakistani born in Britain.

All told of how they had been frequently abused by their controlling husbands, but despite this, only two were prepared to condemn outright the rape of white girls.

“Muslim women must give husband,” said one in broken English.

“He want, she don’t like but must give,” she explained.

“My dad is in prison because he was with others raping small white girls,” said the daughter.

“I hate him. He made my mum pregnant eight times even when she didn’t want to do it. I heard her crying. Six babies died. He did that to her for so long. But never went to prison.”

When asked how they would feel if their children had been drugged and raped, they agreed it would upset them.

“It can’t happen to our children because they are not in the streets. We look after them.”

The Mass Immigration experiment has proved the most destructive and pernicious agenda ever imposed on the British people.

The programme of multiculturalism that it has brought about, has introduced to Britain religious and social sectarianism in which rival communities live separately while harbouring hostilities for one another.

In their effort to contain the problem, the politicians and their media mouthpieces have resorted instead to punishing those who speak out about its failures and deny the reality.

The BNP’s idea of a nation, by contrast, is one comprised of a homogenous people with a common ancestry and a mutual interest in forging a future together.