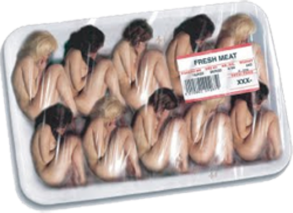 Reports of Muslim paedophile gangs operating in Scotland have revealed that the problem of the grooming and rape of white girls by organised rape gangs of Muslim men is not only confined to northern English towns.

In the wake of the recent convictions in Derby and arrests in Rochdale, a young Glasgow girl has come forward to the media with her own horrific story of abuse at the hands of Muslim gangs.

Caroline (not her real name), who lived in Newlands, on the South Side of Glasgow, tells of how she started a relationship with a man called Nasir when she was fourteen.

“He told me he was 21 and that he really liked me. I was young, stupid and naive, so I believed him,” Caroline, who is now sixteen, said. “I really had no idea that he was part of a gang. He seemed like the perfect gentleman.”

However, Caroline was to find out the truth of Nasir’s gang membership in the most terrible way, when he raped her in front of his fellow gang members, who recorded the attack on their mobile phones.

Caroline was too scared to tell her parents about the rape, and in the coming months Nasir prostituted her to over 60 men.

Perhaps even more worrying than the case itself is the reaction from both Muslim groups and the local police. Mohammed Shafiq, director of the Muslim youth group the Ramadhan Foundation, said of the Asian gang rape phenomenon:

“There is a Scottish connection, insofar as someone rang me and told me about it happening in Glasgow.

“That was one person who was concerned enough to ring me and alert me, but there is no evidence from the police or any other avenue that this is actually happening. It’s based on one comment, rather than evidence.”

That blasé attitude was echoed by the police.

“There is nothing to suggest that this is the case,” a comment that seems to back up former detective superintendent Mick Gradwell’s recent remarks that the police are afraid to speak out about the problem for fear of being branded ‘racist’.

The authorities’ refusal to acknowledge the issue is all the more chilling when one remembers the murder of Kriss Donald, a white Scottish teenager who was kidnapped, brutally tortured, stabbed and burned to death by three Muslim Pakistani gang members, also in Glasgow, in 2004.

After the murder, a former police officer from Strathclyde Police spoke out against what he termed “a culture of Political Correctness” in the police that had allowed Asian gang crime to “grow unfettered” in the city.

That culture of cowardice is clearly still at large, and the indigenous people of this country will continue to suffer and die as long as it remains in place.

The British National Party would remove the Politically Correct constraints under which our police forces constantly have to labour, freeing them to do their jobs of catching criminals no matter what their race or religion, rather than forcing them to adhere to anti-white legislation for fear of losing their livelihoods.