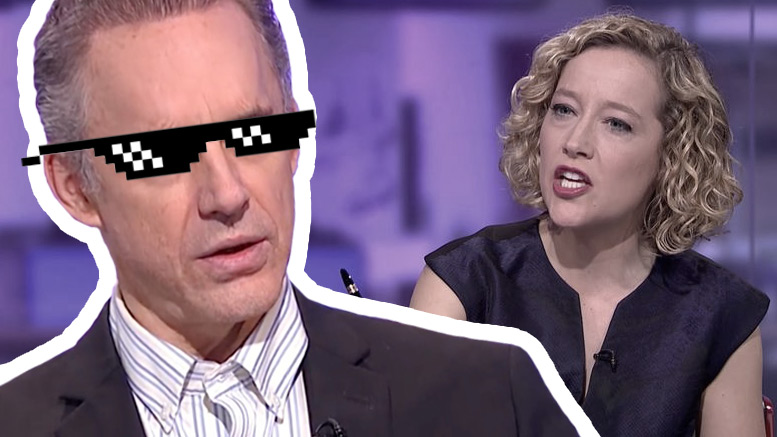 If you’ve been holidaying on Mars for the past few days, you’ll have missed the epic clash of cultures that was the Dr Jordan B Peterson interview with Channel 4 News’ ultra-feminist anchorman Cathy Newman.

Few could have predicted how this interview would catapult the Canadian psychology professor into the spotlight on this side of the Atlantic.

For those unaware of who Dr Peterson is, The Times gave a sound summary of how his plight entered the public sphere.

“If you want to know what the culture war is about, look no further than the spectacular eruption in Britain during the past few days over Jordan Peterson, a psychology professor at the University of Toronto.

“Peterson came to prominence in 2016 when he refused to adhere to a proposed new Canadian anti-discrimination law, under which it was claimed that personal pronouns would have to be replaced by preferred transgender activist terms such as ze or zir.

“The issue for him was liberty. No one, he declared, had the right to dictate what language people should use.

“For this stand, he was compared to Hitler, had his lectures drowned out by white noise and was forced to rely on crowdfunding after his grant application to continue his academic research was rejected. He said he feared for his life.”

Since then, Dr Peterson has built a huge online following.

A familiar face on social media, he’s shared a space with prominent YouTube personalities, not just with that ever-dwindling group of the Left-leaning personalities prepared to listen to differing views, but also with those describing themselves as Rightwing, Libertarian or conservative.

It was Dr Peterson’s recent trip to Britain, during which he agreed to several interviews with Leftist media outlets including the BBC, that he stopped by the Channel 4 News studio for an interview to promote his latest book.

Few might have anticipated the vitriolic reception from Newman.

Watch for yourself here.

Immediately after airing, the video trended in the seventh position on YouTube and has to date, been viewed more than 3.5Million views in just a matter of days.

Having been crushed in the interview, Channel 4 News set about trying to reframe Newman’s being laughed at as ‘misogynistic abuse’.

Confirming what many had suspected, that the news media machine is actually a single entity masquerading as independent, separate organisations, the Left wing media machine went into overdrive.

Among them was The Guardian which attempted to smear Peterson by claiming that he had a “huge following in the alt-Right.”

The Belfast Telegraph ran with a characteristically disingenuous sleight of hand, claiming that to his critics Dr Peterson is an “alt-Right transphobe” – the ‘critic(s)’ in question merely being the author of the piece.

But the most reprehensible article came from The Independent’s man-hating and rabid feminist columnist, Racheal Revesz, which she subtitled:

“When white men feel they are losing power, any level of nastiness is possible – and much power has been ceded of late.”

Dr Peterson gave his analysis of the episode in a follow up interview here.

It’s the same old strategy from the far Left: When the debate is lost, reframe the opponent’s argument as harassment and ban, harass, and smear the person to discredit and ultimately silence them.

It’s an example of resorting to the only tactic they know and they need to pull together to orchestrate a media campaign to prevent it happening again.

Here’s a step-by-step action plan to employ their totalitarian clamp down:

The political Left are losing the argument – they have been for years – and they know it.

As a result, they’re becoming more and more desperate.

Any rational individual in such a position would pause for self-reflection on being trounced in a debate –  but the far Left is incapable of self-critical analysis and devoid of rational thinking.

Doubling-down and employing violence, intimidation and censorship are all they know.

They’ll step it up and concede more and more ground as their vile nature becomes more self-evident and on show for all to see.

Support Dr Jordan Peterson all you can, right now, he’s the man on the frontline in the very fight to save our Western culture and civilisation.