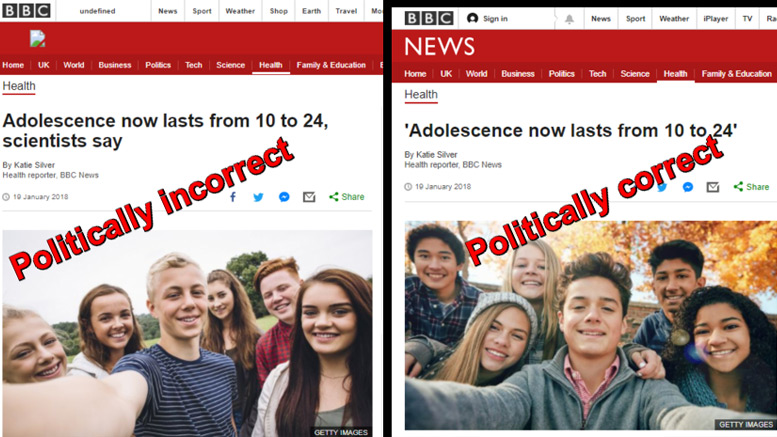 We all know that political correctness is rampant in the publicly-funded BBC.

I was contacted yesterday by an employee of the BBC who alerted me to yet another example of political correctness.

A story appeared on the BBC News website in the Health section.

The title of the story is called ‘Adolescence now lasts from 10 to 24 ‘.

The image accompanying the story shows six young people; three are white, and three are non-white.

However, a few hours earlier another image was used which showed six young people, all of whom were white.

Apparently, this ‘politically incorrect’ image caused a row within the BBC News department.

Afterwards, the image was changed to the ‘politically correct’ image which shows 50% white people and 50% non-white people.

Fortunately, a screenshot of the article showing the PC image was taken before the image was changed.

This latest example of political correctness at the BBC is just the tip of the iceberg.

Whistleblowers inside the BBC are in regular contact with the BNP.

They have told us that staff morale in the BBC newsroom is now at an all-time low, with various factions suspicious of each other.

Staff at the BBC are fearful they will get fired or miss out on promotion if they don’t do enough to promote multiculturalism.

Therein lies the explanation why the image was changed in the ‘Adolescence now lasts from 10 to 24’ article.

We’ll be releasing more evidence of other political correctness at the BBC in due course.