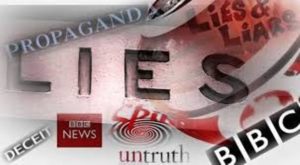 The BBC is the foremost UK representative of the liar press. In particular, Newsnight has lost all journalistic credibility. It is agitprop, pure and simple.

Newsnight is one of the reasons the BBC has lost all credibility about being an honest broker when it comes to impartiality regarding the news.

A programme so corrupted that it employed James O’Brien as one of its main presenters even though he spends most of his time in his other job on LBC sneering at Brexiters or anyone who doesn’t think uncontrolled immigration is less than fantastic.

The mainstream media’s performance prior to and post Brexit, and in the coverage of the US elections was little short of a master class in not being able to smell the coffee, detect which way the wind is blowing and mass self delusion.

And now they are worried about “fake news”, you couldn’t make it up; well maybe they could, they’ve had so much practice at it.

There has been a sudden surge across Europe and the USA of new categories to lump us all into.

Anyone who does not side with the globalist elite agenda are ‘deplorables’, ‘alt right’ or ‘identitarians’. There now seems to be more different types of humans than breeds of dogs.

They are using this strategy to not so much alienate ‘the people’ but to alienate the sort of media they consume, because we are about to enter North Korean style mass censorship.

Newsnight is a mouthpiece for the Guardian, so if you watch it, don’t expect balance.

Why the BBC considers the Guardian as being the purveyor of accurate and unbiased reporting can only be due to the BBC’s personnel selection procedure, which filters out anyone who might be right of centre.