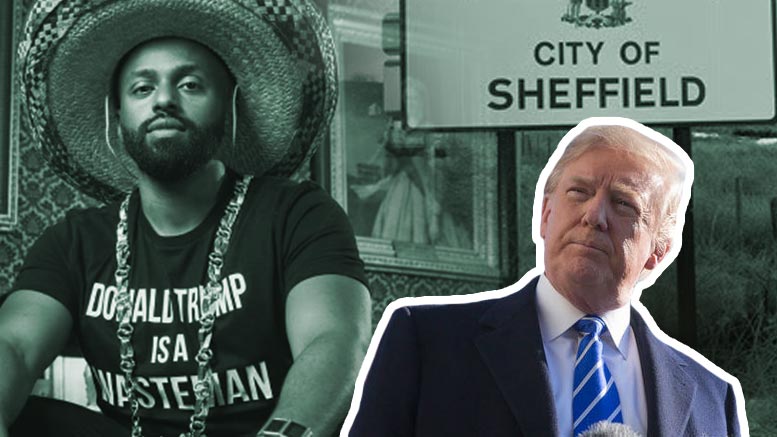 Sombraro-wearing Muslim Mayor of Sheffield, Magid Magid, has banned the US President from entering the city.

According to the clownish mayor, President Trump is a “wasteman” and “Islamophobic” which means that he must be disqualified from visiting a city over which Magid Magid has influence.

The move to alienate the President of Britain’s greatest historical ally has been taken by a Muslim in the interests of Muslims alone.

The history of Multiculturalism is one of division and violence.

In a ‘multicultural’ democracy, the different racial and ethnic groups vote for their own collective interests, and Muslims vote for Muslim interests.

The bigger that identity group becomes the bigger its demands and the more it forces the rest to submit.

It’s happening too in ‘Londonistan’ where Labour’s Islamist mayor Sadiq Khan is working to put Muslims interests before all else and has worked tirelessly to overturn an official state visit to Britain by the US President.

During his disastrous term in office he has also overseen an explosion in violent crime including acid attacks and begun putting into effect Sharia compliant rules including the banning of underwear billboards and ads.

The Muslim immigrants are the colonists of today.

Muslims have nothing of benefit in the way of culture or trade to bring, instead they bring hordes of people which turn parts of Britain into crime-ridden no-go zones characteristic of a banana republic.

These immigrants are now dictating who can and cannot enter Britain.

Unless Immigration is stopped and the traitorous political class held accountable for their betrayal of the indigenous British people, we’ll be forced to submit to Islam in our own country.

The BNP is the ONLY political party which puts the interests of the indigenous British people first every time.

To fight back against the hated and traitorous political class, we need you!

Only by uniting and taking a stand can we save our country – Because together we’re stronger.