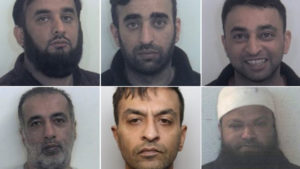 The BNP first highlighted the problem of organised gangs of Muslim men grooming vulnerable, underage, non-Muslim girls for sex well over a decade ago.

We were called ‘racists’.

The BBC even made a documentary with undercover film footage, which was used in a failed attempt to secure a prosecution against the BNP for inciting racial hatred when we discussed this issue.

After the Rotherham scandal, where 1400 victims were systematically drugged, beaten, tortured, gang raped and ignored by South Yorkshire police, politicians and social services, cases such as the trail of a racist paedophile Muslim Rape Gang of 27 Muslim men and TWO FEMALES are now being heard all over the country, wherever Muslims live in large numbers.

As ever, with regards to Muslim grooming gangs, the BNP was telling the truth all along. We will continue to tell the truth.

Every single person, who called us racist or campaigned against us, shares responsibility for the repeated torture and rape of tens of thousands of young girls, while the authorities looked the other way, afraid to be accused of the same alleged racism.

How low have we sunk as a nation, when fear of appearing intolerant is enough to literally allow the sacrifice of children for the sake of multiculturalism and political correctness?

If you still think the BNP is ‘racist’, ‘fascist’ or ‘homophobic’ or any of the other leftwing buzzwords crafted to smear their opponents, ask yourself if you formed that opinion by yourself after reading-up on our published policies or whether it came from listening to overly-liberal media groups like the BBC.

Don’t let the Establishment do your thinking for you. Ask yourself what else we might be right about. Then go and find out!

Only BNP policies can build a safer, better Britain. All others have failed.

To make Britain great again we need people who care about our future. Do your bit and join us today!