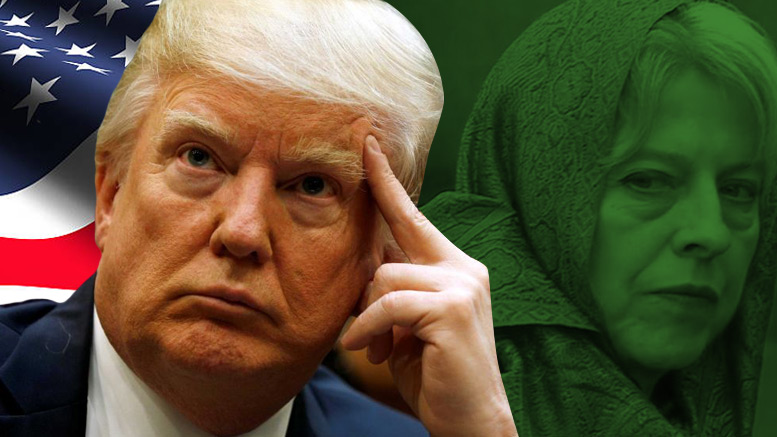 Not content with bending over backward for the Europhiles and attempting to scupper Brexit, increasingly unpopular Prime Minister Theresa May appears to be trying her very best to compromise Britain’s interests with the United States.

This time she’s whining to the EU about the President retweeting anti-Islamist propaganda.

Theresa May, not only has a disturbing track record for Islamophilia, praising Sharia law and prostrating herself before Muslim men in a hijab but in branding Mr Trump’s retweet “wrong” she’s decided for herself that she’s now our ‘moral superior’.

The pathetic show from the embarrassing British premiere prompted a stinging response from her US counterpart:

“Don’t focus on me, focus on the destructive Radical Islamic Terrorism that is taking place within the United Kingdom.

“We are doing just fine!”

Following that, President Trump cancelled his ‘working visit’ to Britain which was planned for the opening of a new US Embassy in London.

In the past year, speculation has grown over whether Theresa May is actually working towards scuppering a good deal for Britain against the EU and calling into question her commitment to leaving the bloc.

May is pro-EU Islamophile, a self-confessed feminist, a multiculturalist and a globalist; she supported the campaign to keep Britain in the EU which has since shown its true colours of being against the interests of the British people by attempting to extort £Billions from the British taxpayer in a so-called ‘divorce bill’.

Now May is trying to style herself as the Brexit negotiator.

Media pundits have even predicted that May would engineer a rift with the US President in order to compromise powerful trade deals between the Britain and the US, providing her with leverage to keep Britain more entangled with the EU – a move which, of course, would please her globalist pay masters.

May treated President Trump with contempt at the United Nations summit earlier this year too, disgracefully using her platform to criticise his stance on immigration, ‘refugees’ and his pulling out of climate change deals.

Now the Islamophilic PM is further provoking the President over his retweeting of anti-Islamist propaganda.

Such a plot doesn’t seem quite so farfetched now.