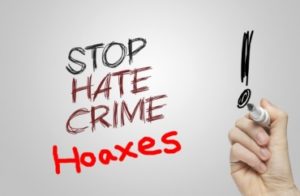 Earlier this week, the Daily Mail reported a disturbing incident from Texas, US, in which a couple’s garage door was sprayed with the words ‘N***er lovers’ and their cars were in flames after being torched.

An alarming crime by any estimation.

The case became infinitely more disturbing when the police investigation confirmed that the ‘victims’ of the crime had committed it themselves.

The growing phenomenon of the ‘hate hoax’, is not confined to the United States, it’s been taking place across the European continent and Britain too – increasing exponentially following the Brexit vote.

Towns, cities, and campuses have been subjected to a diverse array of DIY ‘swastikas’ tagged by ‘intellectually challenged’ vandals who were evidently confounded by the simple aesthetics of the symbol.

Following the Brexit vote, mainstream ‘fake news’ outlets went into overdrive reporting hate hoaxes of all kinds, ignoring crimes by leftist thugs or reporting them as being perpetrated by the right.

Even the tragic murder of a Polish man in Harlow at the hands of a feral youth gang was usurped for the political left’s Social Justice cause.

Arek Jozwik was murdered by a teenage gang of thugs, which the local English community had complained to police about for months – with no action being taken.

The fact that there was no evidence to suggest that Polish people were being singled out by ‘xenophobes’, ‘racists’ and ‘bigots’, didn’t stop fake news outlets reporting ‘hate attacks’ and prompting leftist agitators to spread fear among the Polish community and organise anti-British rallies.

Vice magazine hack Nick Chester in his laughable fake news article admitted that he was “surprised to hear [his cab driver] didn’t think that it was motivated by prejudice”.

Surprised? Sure, that’s what happens when you investigate a story having already concocted the narrative beforehand.

So too, when the local landlord Mrs Cogan of the Essex Skipper pub blamed the murder and ongoing anti-social criminality in the area on feral youths and was reported by the International Business Times as saying she didn’t believe the attack was racially motivated nor a response to Brexit, it didn’t stop hack journalists reporting a different story.

Division has always been a tool utilised by the political left.

Days later after two men were attacked outside a pub after a night of drinking Social Justice Warriors (SJWs) found what they were desperately searching for; the fact that these two men were Polish, confirmed everything they needed to know – this had to be a hate crime, and the facts would not get in the way!

The depressing reality is that street scuffles and fights outside pubs by drunken yobs are a regular occurrence across Britain.

The likelihood that these two men were simply in the wrong place at the wrong time wasn’t to be taken into account by leftists frantically searching for the ‘racists’ and ‘xenophobes’ and ‘bigots’ to justify their Social Justice activism.

Even the dead aren’t spared the rabid hate of the leftist criminals.

Crude daubings of paint spelling out the acronym ‘BNP’ was enough ‘evidence’ for fake news outlets, including the Huffington Post and The Sun to pin the crime on patriots.

The fact that police cancelled investigations shortly after the incident was enough for any and every remotely cognitive human being to recognise that this was yet another hate hoax, perpetrated by a criminal and bitter leftist vandal – and the political police knew it.

The unprecedented rise of the hate hoax prompted self-proclaimed right-wing ‘provocateur’ and unashamed defender of Western cultural supremacy, Milo Yiannopoulos, to dedicate an entire campus lecture to hate hoaxes by militant feminists – all of whom naturally fall into the leftist camp of Social Justice crazies.

The pendulum has swung and the political left is on the ropes – they know it!

Fake news outlets concocting stories in an attempt to incriminate law abiding and wholly decent patriotic citizens of vile crimes, conceivable only from the twisted minds the political left and SJWs.

The creation of propaganda ministries in the form of state-run news.

Attacks on independent and right-wing news outlets and attempts at imposing bans on them.

But the great news and the undeniable fact is that people are waking up to the criminal and immoral excesses of the political left.

The BNP has been manning the frontline in the battle for decades, way before it was cool to stand up and fight against Political Correctness and SJWs.

We have always protected our culture, freedoms and our right to our native homeland.

The BNP are hardened veterans in the fight to protect our country and culture, and leaders in the shifting zeitgeist.

Every crudely daubed BNP acronym daubed by a leftist criminal and every hate hoax is further proof that the left is losing the fight and the BNP is on the winning side of the culture war.