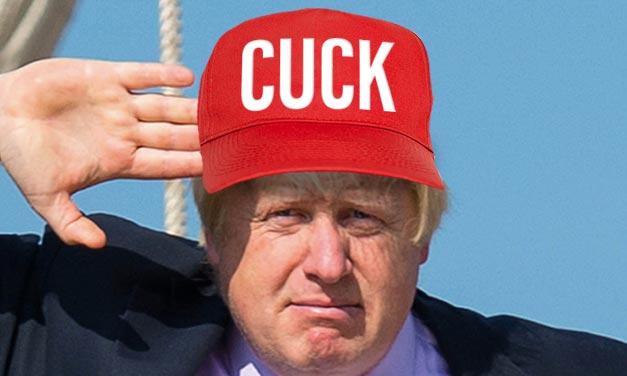 Bumbling cuck, Boris Johnson, has embarrassed Britain on the World stage once again by announcing that the UK is the lapdog of the United States.

Boris Johnson has taken it upon himself to continue the legacy of his odious predecessor, Michael Gove, by rattling the sabre of war with Syria, even calling out Russia over her apparent ‘blind support’ of the legitimate government of Bashar al-Assad.

According to Johnson, Assad is a “monster” for having been accused – and widely vindicated – by the West and Turkey’s dictator, Recep Tayyip Erdoğan, of using chemical weapons against ISIS and Al-Nustra Front terror groups.

The mop-topped career buffoon went further still, pulling a staggering faux par by calling for the ‘decapitation’ of the Syrian leader – apparently unaware that he was echoing the exact sentiments of ISIS.

In an address to British MPs on Tuesday, Johnson said the UK government has not taken any decision yet but would find it “very difficult” to reject a request from the United States regarding attacks on Syria.

“It is my belief, though I stress no such decision has yet been taken, that were such a request to be made in future, were it to be a reasonable request in pursuit of similar objectives, then I think it would be very difficult for the United Kingdom to say no,” he said.

The British foreign secretary added that the UK had been informed of the US president’s order for missile strikes on a Syrian airbase earlier this month.

On April 7, US President Donald Trump ordered two US Navy destroyers to fire 59 Tomahawk cruise missiles from the Mediterranean Sea at Syria’s al-Shayrat airfield, in retaliation for a deadly chemical incident in Khan Shaykhun, which American authorities have blamed on the Syrian air force without providing any evidence.

Denying the allegations, Damascus argues that the incident on April 4 was a result of an air strike hitting a chemical depot belonging to militants fighting the Syrian government. At least 87 people were killed in the town on that day.

Who’re you working for Boris?

It’s NOT in the interest of the British people to take out Assad!

Read more about the role of the British National Party in stopping Britain and the US from waging war with Syria.