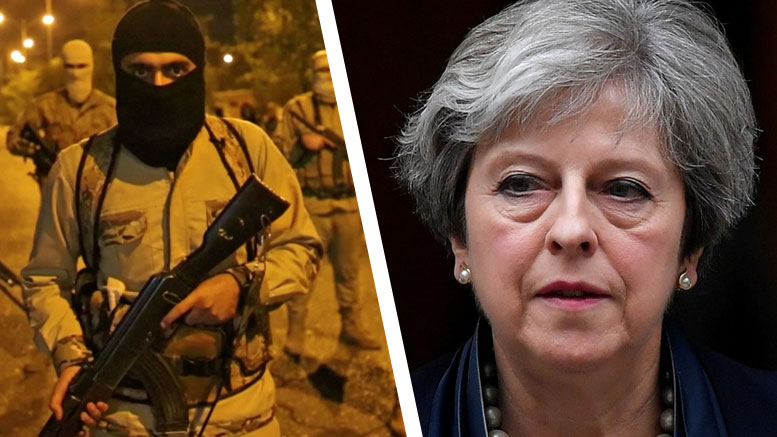 It’s clear Theresa May’s ‘replacement Brits’ haven’t quite bought into her idiotic concept of Britishness – “tolerance” and “being nice” –  after MI5 foiled an Islamist plot to kill her.

A man has been charged with planning to use an improvised explosive device to blow up the gates of Downing Street before entering No 10 and making an attempt on Theresa May’s life.

Naa’imur Zakariyah Rahman, 20, allegedly planned to launch a bomb attack on the security gates outside Downing Street before detonating a suicide vest in Number 10 in a bid to kill Theresa May.

Rahman has been charged with preparing acts of terrorism and will appear in court alongside Mohammed Aqib Imran, 21, who is accused of trying to join Islamic State.

Details of the alleged terror plot were set out to Cabinet members on Tuesday during a briefing by Andrew Parker, the head of MI5.

Mr Parker revealed that British intelligence had foiled nine terror plots in the past 12 months.

The revelation comes just days after MI5 was forced to admit that it could have prevented the mass murder of 23 men, women and children at a Manchester Arena pop concert and the grievous injury of more than 100 others.

According to an official report into the attack, the Islamist suicide bomber, 23, was known to anti-terror cops and under investigation at the time, with a discussion due to take place about his case nine days after he struck.

Also being monitored by security services before they struck were the Westminster Bridge attacker and one of the four London attackers who singled out white people in a stabbing spree.

Follow her reading of the 61-page document, Home Secretary Amber Rudd – who’s spent her time searching high and low for ‘right wing’ groups to proscribe under government anti-terror laws – stated that the responsibility for the attacks on British people “lies squarely” with the Islamist terrorists.

Answer for the British people, Rudd, who brought these Islamists into the country, forced us Brits to have to live side by side with them and defended the pernicious multicultural agenda at every turn?

Answer: You, Theresa May, and your all your political ilk!

Now the British people are condemned to living with her failed and disastrous social experiment.

Given the ages of the Manchester suicide bomber and the latest two Islamists now remanded in custody, the millennial generation of Muslims have not only refused to buy into the idiocy of the politicians’ totalitarian ‘tolerance’ and Politically Correctness, but have rejected it in its entirety and are using it as fuel to fire their hatred for Britain and the West.