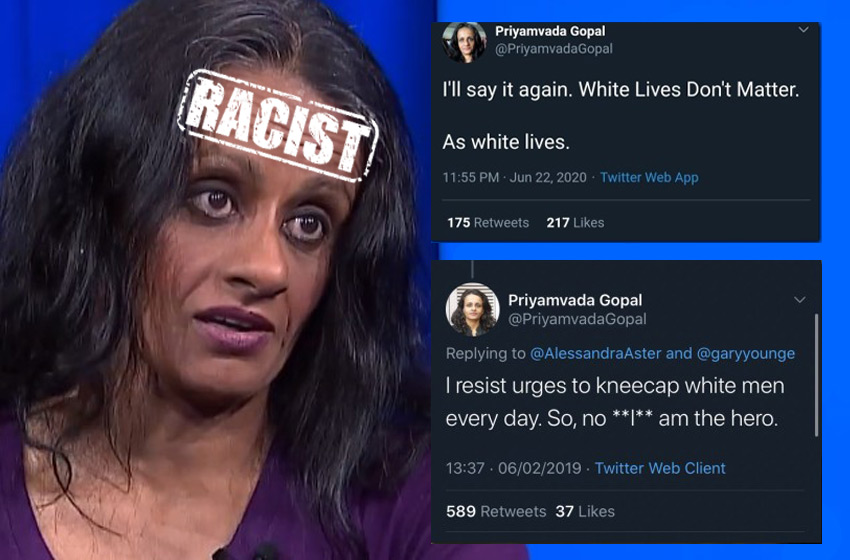 Gopal was found inciting racially aggravated violence after publishing a torrent of racial abuse on the social media platform.

In her hate fuelled tirade, the racist academic demanded that “whiteness be abolished” referring to attacks by fellow Marxists on our Churchill statue outside of Parliament.

The reaction from the Marxist media was an attempt to portray Gopal as the victim of bullying while feigning infinitely greater outrage over a “White Lives Matter” banner that was flown over a football match in Manchester.

Following her exposure, more hateful tweets were discovered, this time inciting racially aggravated violence towards the White male ethnic minority, including one instance where Gopal states, “I resist urges to kneecap white men every day. So, no **I** am the hero.”

An online petition demanding Gopal’s sacking received 20,000 signatures before it was removed by Leftists at Change.org.

Since the 1960s, Marxists have seized huge power in the cultural arena by way of their ‘long march through the institutions’.

Among many others, Marxists infiltrated and captured the institutions of schooling, policing, the news media, sport and the Church.

To maintain their grip on power, these Marxists have established institutional racism designed to ‘gatekeep’ and bar entry to ordinary White people while waging war on British and Western culture and inciting racially aggravated violence against native Brits in our own native homeland.

Conservative politicians have all surrendered and bent the knee.

It’s up to ordinary British people to take a stand and fight back!

The British National Party has experienced an unprecedented surge in new members and donors in the past month.

Ordinary people, who have never considered joining a political party before now count themselves among the resistance against the Marxist madness.

The very future, identity and well-being of the native British people and of Western culture is under unprecedented and rabid attack, these courageous people have chosen to take a stand.

Isn’t it time you joined the BNP to fight back and preserve the precious and unique British people in their own homeland from hell-bent Marxist insurrection?