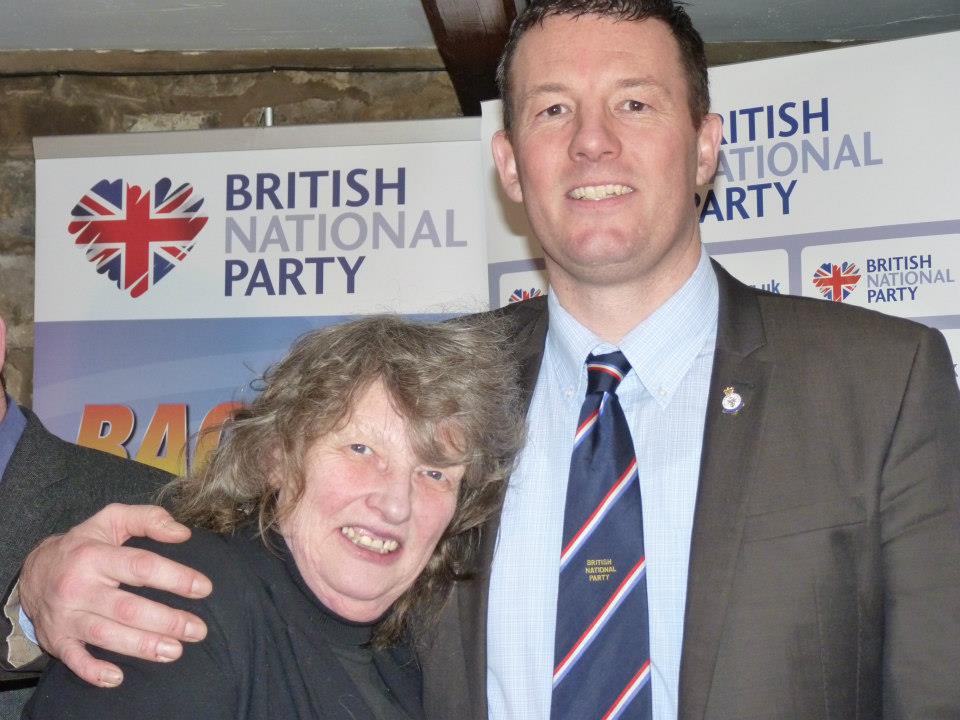 We begin 2015 with some exceptionally sad news. Marlene Guest, nationalist legend, long-standing BNP activist and a keystone of our Party, has passed away after a long illness.

Although Marlene touched many lives, she touched mine profoundly and I would like to try and express the appreciation and admiration I had for her.

Marlene and I had been in regular contact during the final stages of her illness and I visited her whenever possible.

Friends of Marlene will know how typical it is of her that she did not once hold back during our often lengthy conversations.

She was not shy in giving honest advice on what she thought I was doing right and what she felt needed doing better.

I will miss her council terribly.

You could guarantee that Marlene always grabbed the headlines and the simple act of joining the British National Party over a decade ago caused a huge media storm when she defected from the LibDems.

Even back then she had already begun exposing the rotten underbelly of politics in Rotherham, starting with the financial scandal involving former Rotherham Council Deputy Leader the Labour Party’s Gavin Reed.

Marlene joined the BNP because she recognised that the anti-Establishment BNP was not only trusted, but had the honesty and integrity to take on corruption where ever it was found.

Marlene’s move to the BNP allowed her the to continue her work with the full support of an anti-Establishment political party behind her, gaining respect from not only the public, but her critics and even her political opponents.

Corrupt politicians began to fear Marlene, as she lined up the next Labour criminal tax-thief Denis MacShane, and taking his scalp in a high-profile corruption-busting campaign.

“I am shocked and saddened that the BNP has won its three-year campaign to destroy my political career as a Labour MP,” said MacShane.

The only thing shocking was that Denis MacShane thought he could get away with robbing the people blind on Marlene’s watch!

Marlene was one of the first to tackle the scandal of street grooming by Muslim gangs in Rotherham and further afield.

Marlene’s reputation preceded her and she was contacted by a neighbour whose daughter had been abused by the grooming gangs.

The ongoing enquiry into the horrific extent of the grooming scandal began to come to light last year, and the enquiry used the mountain of research compiled by Marlene over the past ten years.

When the Muslim grooming scandal broke and the Labour Party’s South Yorkshire Police & Crime Commissioner Shaun Wright denied any knowledge of the matter, it was Marlene’s documented evidence that proved him a liar and forced him to resign in disgrace.

She had spent years campaigning on the matter, writing to him as head of Children’s Services, speaking at meetings in his local pub and leafleting the streets around his home.

I know Marline took some comfort from the fact that she was proved right last year when the truth finally came out about the Muslim grooming and the public finally knowing that what she had been saying for so long was correct.

There are women and girls in this country living safer tonight because of Marlene’s tireless and successful campaign.

Though a political thorn in the side of the local authority, activists and elected members from other groups within the local council respected her, and often approached her with information when they could not act on with good conscience within their own party lines.

She never once betrayed a confidence or abused their trust.

So popular was Marlene in her native Rotherham that she won the highest ever vote by a BNP candidate in Parliamentary by-election coming third, again shocking the political establishment.

During one of Marlene’s campaigns I’ll always recall her earthy giggle when she suggested we invent a story of a secret affair between us just to see if the hostile leftist press would publish it.

When faced with her terminal illness, she remained defiant, vocal and as active as her condition would allow within the Party.

In my role at the time as National Organiser, I arranged for her to be awarded Life Membership of the party as a thank you.

Marlene was a British hero, a keen proponent of the plight of the beleaguered British working class.

She lived by her convictions for what she knew was right – fair play, freedom and justice. Marlene never gave up and her legacy is a shining example to us all. She was a personal friend to me and an inspiration to us all.

I always thought she was the first to coin this phrase but she told me during the summer that she borrowed it from somebody else years earlier.

And since the Rotherham child sex abuse scandal at the hands of Muslim gangs has become public and as the walls of secrecy start to crumble around the country, revealing more crimes against our children by these invaders, Marlene’s words echo all the more strongly: her political detractors may have attempted to smear her as ‘far right’ – but Marlene was never far wrong.

Goodnight and may you rest finally in peace, Marlene Guest we are lessened by your passing.