Jeremy Corbyn is scared of a general election because the Labour Party’s current stance on Brexit is a complete mess. 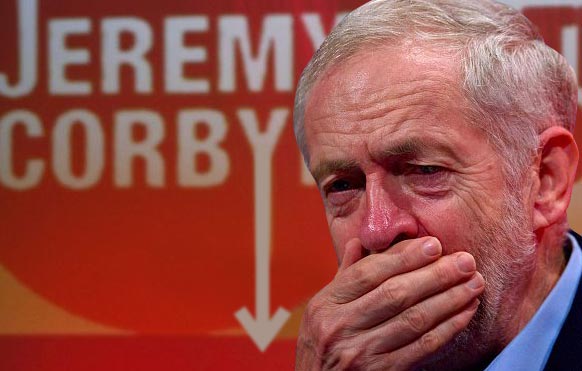 Labour’s problem is that millions of its supporters voted to leave the European Union. However, most Labour MPs and those in the upper echelons of the party don’t want to leave.

According to estimates, most Labour constituencies voted Leave. Unfortunately, we don’t know for sure because not all of the votes were counted by parliamentary constituency.

The best estimates are that 60% of Labour constituencies voted Leave.

Not willing to alienate Labour Leave-voting supporters, Corbyn has pursued a policy of ambiguity over Brexit. He has tried to keep both Leavers and Remainers happy.

This strategy of vagueness has failed. Ultimately, the UK leaves the European Union, or it does not.

It would be better for Jeremy Corbyn and the Labour Party to respect the biggest and most significant democratic mandate (the EU referendum) in British history.

The Labour Party’s ambiguity over Brexit will cause them to lose their Remain voters to the Liberal Democrats, and their Leave voters to the Conservatives — that’s why Jeremy Corbyn is scared!

So, Labour’s plan now is to force Boris Johnson to go begging for yet another extension to the Brexit deadline! In a YouGov opinion poll, only 5% of people thought a Brexit delay was a realistic outcome.

Labour Party wants to negotiate a deal with the EU

Ultimately, the Labour Party wants to negotiate a deal with the EU.

Knowing that the government had already ruled out no-deal, the EU would then be free to offer a bad deal. The Labour government would take little convincing to accept.

Labour would then have a second referendum, with two options: the bad deal or to remain in the European Union. These would be the only two options. No deal would not be an option on the ballot paper.

Either way, the EU wins.

Jeremy Corbyn and the Labour Party would campaign to reject their own deal because they want to remain in the EU.

We must deliver on the democratic vote held over three years ago in 2016.

Let us leave the European Union by 31st October 2019. Our delayed departure from the EU costs the UK one billion pounds every month.

The British National Party is the original Brexit Party. We’ve been warning about the dangers of European political union since 1982.

We say that the nations of Europe should be free to trade and cooperate whenever it is mutually beneficial without being forced into a straightjacket of political and economic unification – which is neither desirable, ultimately practically unfeasible and which is guaranteed to create conflict rather than avoid it.

Read more about the BNP Policies.