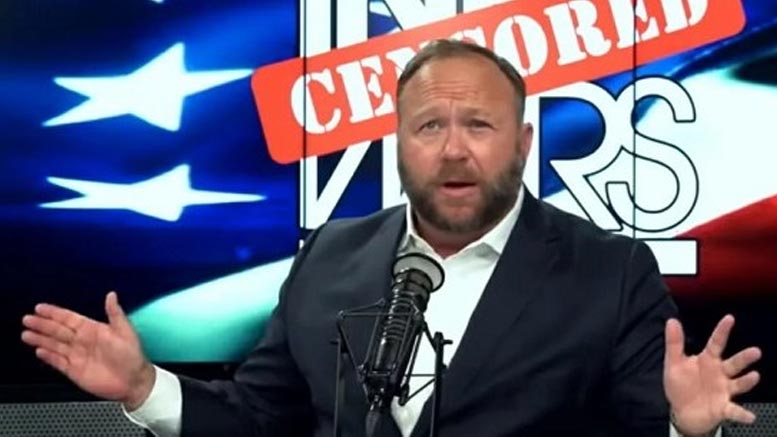 The Globalists are in crisis… and to make sure no one is in any doubt, they’ve banded together to collectively ban hugely popular US alternative news jock, Alex Jones.

On Monday, Jones was banned and had his content removed from the platforms of a host of major tech companies platforms – all within a matter of hours!

The purge was orchestrated by Google-owned YouTube, Facebook, Apple, Amazon, Spotify, LinkedIn, Mailchimp and others in an online coordinated effort, the like of which has never been seen before.

The patriotic, Trump-supporting media outlet, along with its tens of millions of followers worldwide, has been silenced just months before the US elections (Midterms) which mostly take place in November, and two years into a president’s term of office.

It’s a coordinated, politically motivated attack on Jones designed to damage the Republican (currently Trump’s party) vote and enable the Leftwing Democrats (both Obama and Clinton’s party) to make significant gains to place in them in a better position to take on President Trump in 2020 when he seeks his second term in office.

Tech companies, infamous for their obsession with Social Justice and their Leftwing bias are leading the way in mass censorship.

BNP online administrators have been consistently hit with temporary bans for posting factual content on social networks of which the companies disapprove.

Regardless of the opinion of Jones and his independent news outlet, this unprecedented attack amounts to a declaration of cyber civil war.

However, tech companies have now stepped into uncertain territory.

They maintain this position by claiming that merely offer a platform for people to publish their opinions and do not themselves make editorial decisions by managing content and censorship.

The Jones’ purge is a flagrant departure from this position.

Censoring some while publishing content from others defaming them, might open up a series of prosecutions against them.

The Left are losing the culture and political war!

As a result, they’ve become desperate and are now revealing their true nature… one of hatemongering, suppression, persecution, censorship, and defamation.

The BNP has been in this fight longer than anyone else, we’ve seen it all. We’re fighting fit and lead the way… and we’re winning!

Count YOURSELF among the winning side!