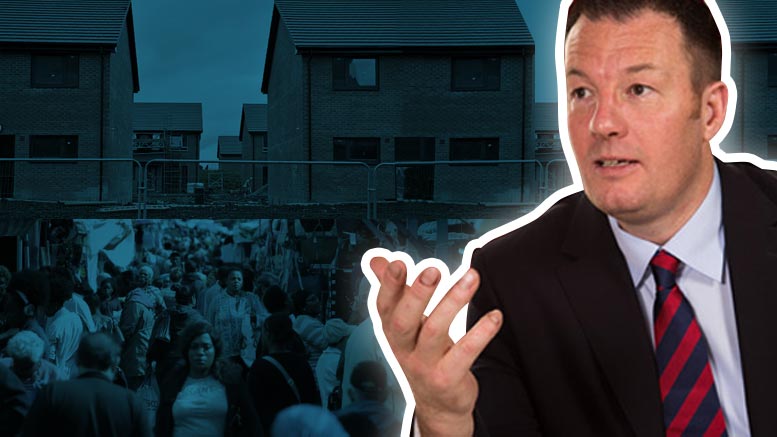 The latest projected figures from the British government’s Office for National Statistics (ONS) on household growth for the coming decades are less than those previously released despite the ongoing Immigration shambles.

In 2014, the ONS announced that 210,000 new households will need to be created every year for 25 years to stand a chance of coping with the politicians’ Mass Immigration project and Population Replacement programme.

Tory ministers have put the drop in the figures down to the fact that they’ve made it more difficult for young people to buy a home for themselves and are therefore forced to live with their parents for much longer.

“The BNP has always led the way in demanding that the politicians carry of the will of the British people and put a stop to their destructive Mass Immigration protect.

“Not only is Mass Immigration destroying the precious and unique culture and identity of the British people, it threatens lives by putting massive strain on our health and public services and creates huge challenges in housing among other things,” Mr Walker told reporters.

The housing crisis is an issue largely ignored in the pointless debates held on immigration by the political class in their chattering chambers.

Back in April, then housing minister Dominic Raab was forced to concede that Mass Immigration has pushed housing prices in Britain up 20 percent in 25 years.

The BNP has the answer to the housing crisis.

Close Britain’s borders and stop ALL further immigration into Britain until we can sort of the politicians’ Immigration shambles.

Introduce the comprehensive BNP Housing Plan – sections of which the Tories have already stolen some years ago and entered into their manifesto – and concentrate on developing ‘brown field’ sites and the hundreds of thousands of properties across the country which are currently still being left unused.

The implementation of BNP policies is the ONLY way to improve the lives of British people, and put the interests of the British people first in their native homeland.