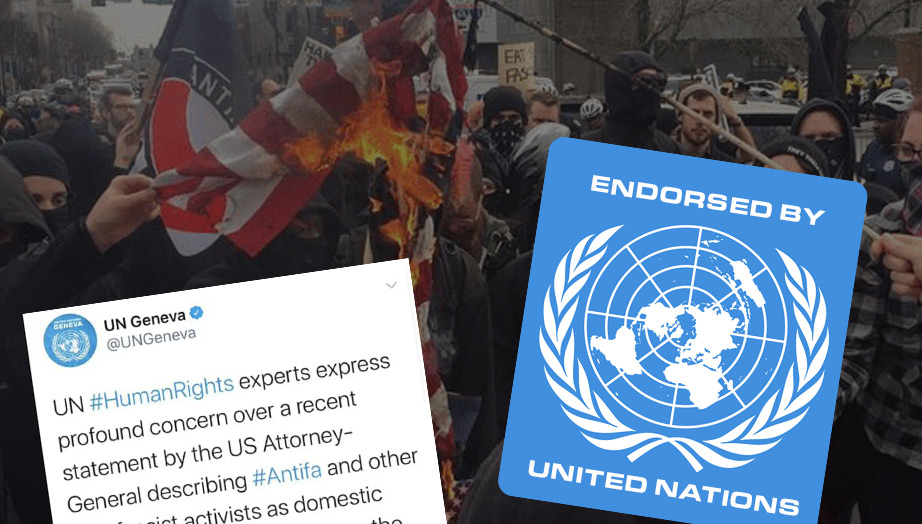 Published on 20 June, the tweet promptly disappeared after provoking outrage and demands to ‘Defund the UN’.

In the 20 June tweet, published on its official Twitter account, the UN stated that its “human rights experts” had “profound concern” that Antifa terrorists and other violent “anti-fascist” were having their “right to freedom of expression and of peaceful assembly” undermined after being designated “domestic terrorists.” 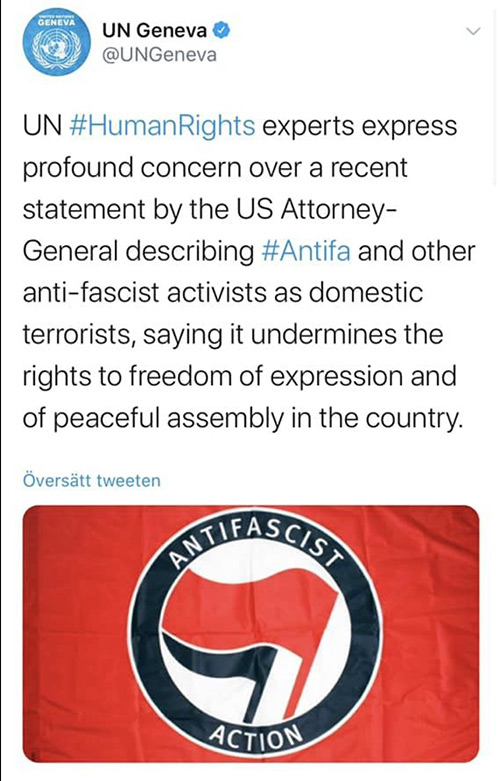 After provoking outrage and demands to ‘Defund the UN’, the globalist institution hurriedly deleted it.

Tweeting on May 31, President Trump made it clear that he intended to designate Antifa a terrorist organisation after those claiming to be from the group waged a riotous campaign of arson, looting, violence and vandalism in cities across the United States.

“The violence instigated and carried out by Antifa and other similar groups in connection with the rioting is domestic terrorism and will be treated accordingly.”

Who or what is Antifa?

In Britain, Antifa is an extreme Leftwing activist group which has operated for decades supported and promoted by the ironically-named ‘Hope Not Hate’ – a George Soros funded organisation of anti-British Leftwing radicals.

In the United States, there has been widespread uncertainty and debate over who or what Antifa actually is.

While is outwardly appears to be an outlet for privileged White millennial ‘anarchists’ to vent their anger through violence and wide-scale vandalism, it might more accurately be recognised as a loosely defined movement espousing radical Leftist ideology.

One thing we know for certain is that the UN is running cover for an international extremist group which has conducted violent attacks of insurrection across the United States and Europe.

Regardless any official description and claims by Leftwing conspiracy theorists that the group does not exist, the UN has declared that Antifa not only exists, but has goals worthy of UN endorsement.

The hurried backtracking by the UN strongly suggests that someone high up feared its Twitter spokesmen had revealed too much about the true nature of its nation-destroying aims.

The BNP says: Defund the UN!

Isn’t it time you took a stand against the globalist attacks on our country?