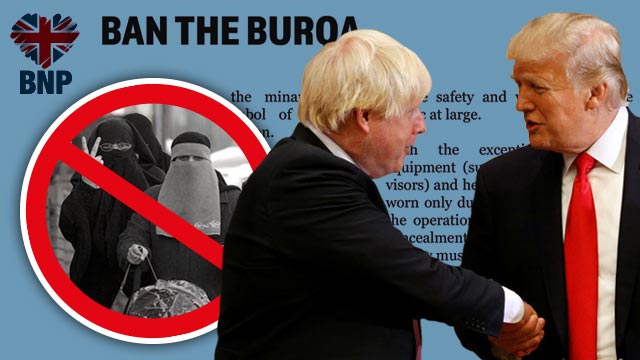 To the horror of the his political class and their media, Boris lampooned the oppressive garment comparing the appearance of Islamists in burqas and niqabs to “letterboxes” and “bank robbers”.

Occasionally, even members of the political class are struck by common sense and speak their mind, but what makes this instance remarkable is that Johnson refused back down and apologise.

This ‘insolence’ was met with outrage by the political class, multicultural hacks and PC pundits which all called for him to be punished and demanded that the widely travelled Foreign Secretary attend ‘diversity’ indoctrination classes.

Muslim appeaser and anti-Brexit supporter, Prime Minister Theresa May, of course, disapproved of Johnson’s joke and branded it “offensive”.

May’s priority lies in appeasing the Islamist invaders – yes, the wearing of the burqa is a flagrant refusal to adopt the culture of their chosen country – while denouncing the 57% of the British public which find the burqa offensive, threatening and support BNP policy to have it banned.

For decades, BNP spokesmen have led the way in unashamedly flouting Political Correctness, but when a veritable member of the political class does so, something’s up!

So what’s going on here?

It’s becoming increasingly evident that Theresa May is unfit to be Prime Minister and negotiate the terms of Brexit – an view seemingly shared by President Trump.

That’s why on his recent official visit to Britain he endorsed Boris Johnson for PM, stating that:

“Boris would be a good prime minister.”

Trump has, contrary to what his dim witted detractors say, a proven track record of calculating  – however brashly – his announcements and following up on them.

Could it be that Boris has not only taken to heart the President’s endorsement, but also a queue from his unorthodox, straight-talking popularist rhetoric?

Along with the popularist nationalist politics that sweeping the West, a new type of politicians is beginning to emerge. One that puts the interests of the the people first before that of the globalist paymasters.

If Boris is indeed styling himself on the new model, he’ll be scouring the BNP manifesto for policies to lift.

As long as BNP policy is implemented the one way or another, the BNP has wins!

The BNP is a political party made up of ordinary people like YOU – our mission is to save our country by having BNP policies enacted.

By pressuring the politicians to put BNP policy into effect, the BNP is victorious.

To do this we need YOUR help to increase our strength by numbers, spread the word and join forces in piling the pressure on the politicians to put BNP policy into effect.