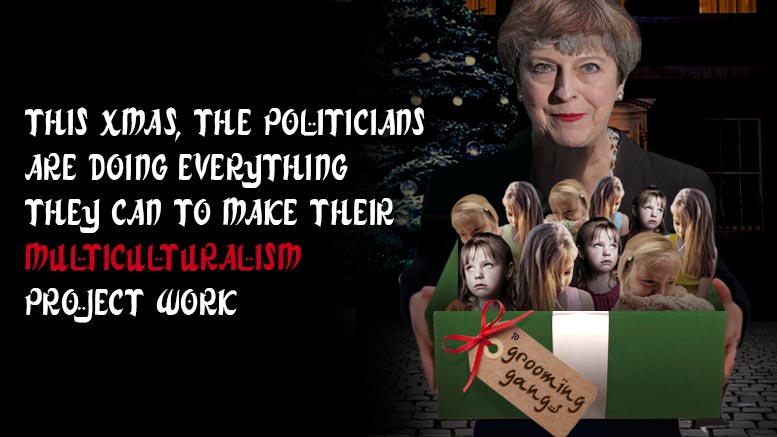 This year the BNP is using our Christmas message to speak out on behalf of our young white girls, sacrificed in the name of Political Correctness by the corrupt Establishment and the political class.

Single-handedly and under crippling persecution, the BNP brought the horrific attacks on our children by Muslim Rape Gangs (tamely referred to in Establishment media as ‘grooming gangs’) to the World, and provided the notorious 2014 Jay Report with the vast bulk of evidence used to reach their damning conclusion.

It revealed that authorities had ignored the declaration of “racially motivated” war on the British people made by Muslim Rape Gangs, still more horrifying was evidence that social workers and police chiefs had conspired with them to ensure they could carry out the attacks on our children with impunity.

The evidence was conclusive; white girls were being handed over to gangs of paedophilic sexual predators “of Pakistani heritage”, tortured, gang raped and trafficked all in the full knowledge of police forces, politicians and social workers.

It is a politically motivated drive to appease the Muslim colonisers, to keep the politicians’ multicultural project from total and bloody collapse, and to ensure the Muslim bloc vote for the Labour Party.  As the BNP had always maintained, Rotherham was just the tip of the iceberg.

Scores of other towns and cities had been terrorised in the same way, prompting West Mercia Police Supt Tom Harding to attempt to excuse himself by insisting that the Muslim Rape Gangs operated in every town and city across England and Wales and not just a problem is his city of Telford.

This horrific scandal is a betrayal by the Establishment – the political class, their police and authorities and their media mouthpieces – of the highest order.

At the time of print, that sick and rotten edifice is headed by Theresa May, a career politician who could have acted at any time to protect our girls.

She, like the rest of her deplorable ilk, must be held accountable.

The BNP is the ONLY anti-Establishment political force in Britain!

The stronger we are the greater pressure we can put on those who can effect change.

You can help us to help those little girls.