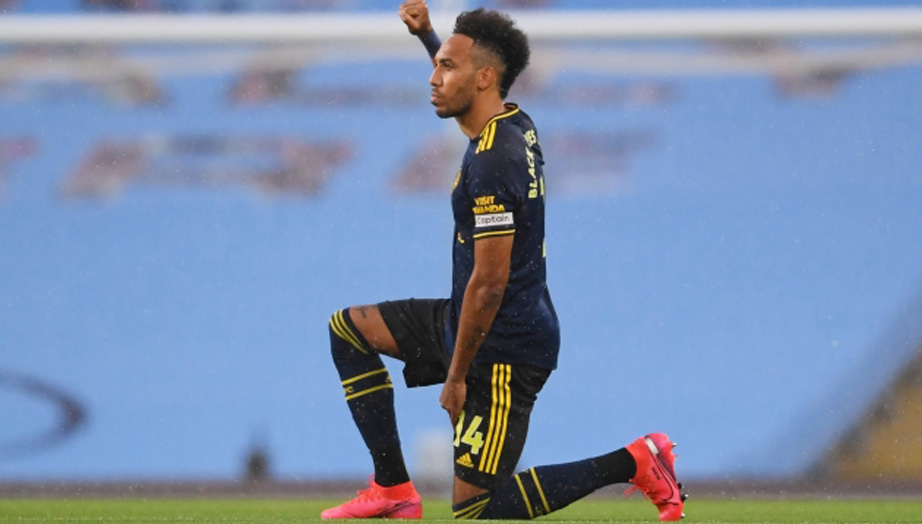 The English Football Premier League has again succumb to the Leftwing activists in its ranks after players were forced to ‘take the knee’ in support of Far Left activist race group ‘Black Lives Matter’ (BLM).

The Premier League resumed on Wednesday 17 June with Manchester City playing Arsenal after a two-month hiatus owing to the government’s coronavirus ‘lockdown’ measures.

During that time, an incident occurred 4000 miles away, across the Atlantic Ocean, in the USA.

This event prompted every single player on the pitch to replace their surname – customarily emblazoned on their backs – with the words ‘Black Lives Matter.’

The hijacking and misuse by Leftwing political activists of cultural institutions is nothing new, and they’ve now wormed their way into the Premier League football association.

These days we’re unable to watch our nation’s favourite game without having Leftwing slogans rammed down our throats and kick-off stalled to pay respect to the latest Leftwing-designated ‘victims’ of the hour.

If it’s not rainbow armbands to raise purport LGBTQ victimhood, then its the Left’s all-time favourite obsession – race!

For Leftwing activists, the Premier League is prime territory for stirring up resentment and racial hatred.

Firstly, the Premier League has a massively disproportionate representation of Black among its players compared to the racial demographic in England.

Secondly, professional football players are not picked for their intelligence rather their ability to kick a ball.

Take Manchester City’s Raheem Sterling for example. Convincing him of his victimhood appears to have been a delightfully easy task.

Following the game, Sterling spoke out in favour of BLM race group while failing to take to task his fellow player on the pitch, Pierre-Emerick Aubameyang for even raising a Black Power salute.

One of the most privileged people in the country, Sterling can also be counted among the wealthiest Blacks in the world having benefited a great deal from the Western culture which he feels owes even more.

There’s another thing to consider in this sorry episode.

Imagine, one of those footballers – likely White, though maybe a conscientious Black player – thought the hijacking of his game a tasteless political charade of which he wanted nothing to do with.

Imagine if this professional football player, who had trained since he was young and in whom love for the ‘beautiful game’ burns bright, simply wanted to play football without the political propaganda.

Would he be spared if he refused to take part in the Leftwing political charade?

Of course not, he’d be branded an evil ‘racist’ by the racist Left, crucified in the Marxist media and promptly sacked with his football career going up in flames faster than a Black-owned business during a BLM riot.

The political Left, in its perpetual, hell-bent campaign to destroy everything of cultural relevance, has forced into English football a foreign, political issue and hijacked the Premier League.

The force-feeding of Leftist propaganda is making millions and millions increasingly fed up.

It’s not long before the Left, emboldened by the tolerance, morality and decency of their opposition, cancels itself and begins the process of ‘guillotining’ its own.

If you can no longer stomach Politically Correct football, sitting back and watching the Left self-destruct is a entertaining past-time to replace it with.

Isn’t it time you took a stand against the Leftist attack on our culture?