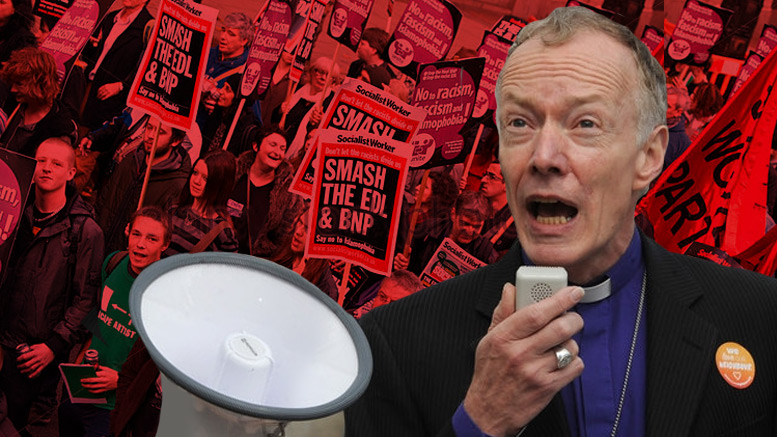 An Anglican church bishop has upset the local British community after interfering in politics by demanding that plans for a plaque to commemorate famous anti-Immigration politician, Enoch Powell, be revoked.

The Bishop of Wolverhampton and notorious Social Justice Warrior (SJW), Clive Gregory, has interfered in the debate, parroting the idiotic and fallacious Leftwing narrative that opposing Mass Immigration is “racist”.

The anti-British bishop whined that allowing such a plaque would be “widely interpreted as honouring Enoch Powell’s racist views”.

“It is disingenuous to suggest that the conferring of a blue plaque on such a divisive figure would be a ‘neutral’ act.

“It would be widely interpreted as honouring Enoch Powell’s racist views and would no doubt provide a focus for those who wish to exacerbate divisions within our communities and undermine the values that bind us together as fellow citizens.”

In his letter to the plaques secretary of the Civic and Historical Society he wrote:

“As menacing forces of prejudice and hate once again gather across parts of Europe, we must remember where that led not so long ago.

“Instead of commemorating Powell, we need to resist those who would sow seeds of hatred, racism, and division.”

Gregory knows something about hate, racism, and division, of course, because he was last seen bawling down a megaphone denouncing cross-carrying patriots for “blasphemy” in front of an Antifa rabble.

Conservative MP, Enoch Powell, gained notoriety with the political Left in 1968 after making his famous ‘Rivers of Blood Speech’, an indictment of the disastrous Mass Immigration policy of the politicians.

Widely regarded as the ‘greatest prime minister Britain never’, Powell continues to be revered as a significant figure in British politics and one before his time.

His popularity with the British public is something that is not shared by the increasingly politicised Anglican church with its dwindling congregations.

Just how out of touch the Anglican church SJWs are with the British people was demonstrated after the Wolverhampton Express and Star conducted a poll asking readers whether Powell should have a plaque erected in his memory.

More than 3,000 people voted in the first 36 hours since going online, with two-thirds responding in favour of the Powell plaque.

Gregory dismissed this majority as ‘racists’.

The nefarious Social Justice movement and its doublespeak language of Political Correctness infiltrated the Anglican church in the 1960s during the Leftwing students’ ‘long march through the institutions’.

The previous Arch-bishop of Canterbury, Rowan Williams, emboldened by the fact that the political Left had taken over the entire institution, gleefully described himself as a “hairy Leftie”.

This take-over of the institutions is documented in the latest IDENTITY magazine which traces the Marxist origin of Political Correctness.